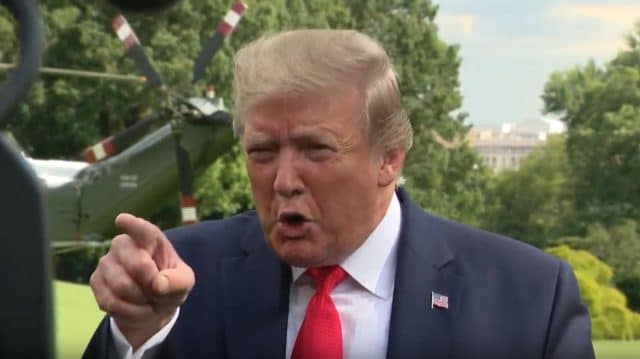 President Trump lashed out at a female reporter Wednesday afternoon after she correctly pointed out that former special counsel Robert Mueller confirmed in testimony to Congress earlier in the day that the president could still be indicted after he leaves office.

“Mueller said you could be charged once you leave office,” CBS News correspondent Paula Reid told the president.

“You’re fake news and you’re right at the top of the list also!” Trump angrily shouted back. “Let me tell you. Go back to…”

“That is what he said,” the reporter countered.

“That’s not what he said,” Trump falsely claimed.

“That’s why people don’t deal with you. You’re not an honest reporter,” he said as he turned and walked away from the reporter.

In fact, Mueller confirmed that President Trump could be charged with obstruction of justice after leaving office.

“Could you charge the president with a crime after he left office?” Rep. Ken Buck (R-Colo.) asked Mueller during the former special counsel’s testimony.

Buck appeared to be taken aback by Mueller’s response.

“You believe that he could committed – you could charge the president of the United States with obstruction of justice after he left office?” Buck repeated his question.

Trump praised Republicans lawmakers as “incredible warriors” who were “defending our country.”

Mueller testified that his investigation was “not a witch hunt.”

Watch the exchange, below: