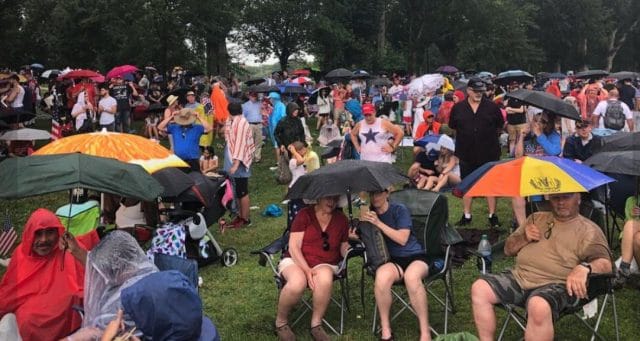 President Donald Trump’s Fourth of July “Salute to America” celebration has been officially delayed due to weather, CNN reported Thursday.

Journalist Shimon Prokupecz tweeted: “Trump Mall event delayed – unclear for how long. CNN has not yet gotten details of the length of the delay, but there is severe weather in the Washington area and low cloud cover.”
‏
He added: “Trump still plans to deliver remarks at his Salute to America event, despite an announcement there would be a delay in the program. Press Secretary says there has not been a bad weather call and that the president would travel the short distance to the Lincoln Memorial”

Trump was originally scheduled to deliver an address at 6:30 p.m. ET.

Video taken near the National Mall showed a heavy downpour in progress around 5 p.m.:

Trump responded to the weather delay by tweeting: “Weather looking good, clearing rapidly and temperatures going down fast. See you in 45 minutes, 6:30 to 7:00 P.M. at Lincoln Memorial!”