Richard Grennell’s confirmation was held up over his history of sexist tweets.

It took almost 16 months for the Senate to confirm Richard Grenell as U.S. Ambassador to Germany. It took considerably less time for Grenell, sworn in this month by Vice President Mike Pence to upset his host country.

In a tweet Tuesday, the day he arrived in Germany, Grenell warning companies doing business in Iran to “wind down operations immediately.”

As @realDonaldTrump said, US sanctions will target critical sectors of Iran’s economy. German companies doing business in Iran should wind down operations immediately.

The tweet came the same day Trump signaled he wanted to pull the United States out of President Obama’s Iran deal, which limits that country’s nuclear production in exchange for easing sanctions.

When German-based NBC correspondent Andy Eckardt retweeted him—and noted that Germany, France, and the UK were emphasizing their “continuing commitment” to the deal—Grenell insisted he was just following White House talking points.

In his first week in office in Berlin — New US ambassador to #Germany calls on German firms to ‘wind down operations in Iran’. Germany, France and UK emphasised their ‘continuing commitment’ to #JCPOA #IranDeal https://t.co/e9a7LhELMs

Wolfgang Ischinger, Germany’s ambassador to the U.S. from 2001 to 2006, advised Grenell to explain the United States’ perspective instead of telling Germans what to do. They are “eager to listen, but they will resent instructions,” he tweeted.

Ric: my advice, after a long ambassadorial career: explain your own country’s policies, and lobby the host country – but never tell the host country what to do, if you want to stay out of trouble. Germans are eager to listen, but they will resent instructions.

Ischinger was not the only one to criticize Grenell’s approach to diplomacy.

“It’s not up to me to teach the U.S. ambassador how to be diplomatic, but he does seem to need a bit of tutoring,” Andrea Nahles, who the leads Germany’s Social Democratic Party, told Deutsche Welle.

“Good cooperation means that you do not drive a highly aggressive, ruthless policy towards our security interests and, before you even show up, you threaten the German economy,” Omid Nouripour, a member of the Green Party, told Deutschlandfunk radio. “It’s just not a tone of cooperation.”

Making such a demand of German businesses, especially so soon after becoming ambassador, was “just not how you can treat your allies,” Asselborn added. 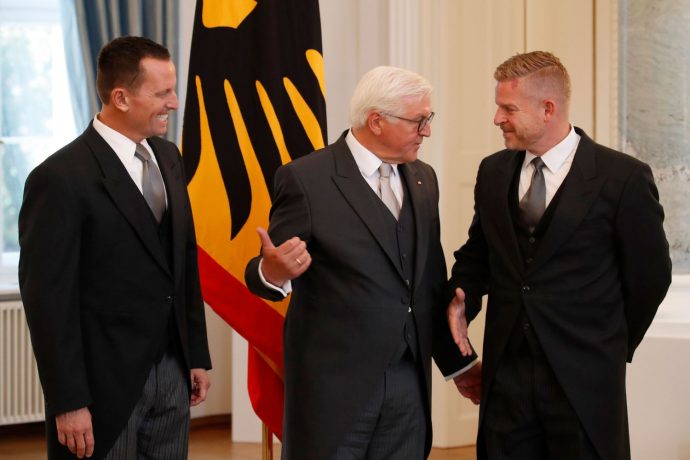 And Michael Tockuss, chairman of the German-Iranian Chamber of Commerce, said he was sure that the foreign ministry would remind Grenell “that it’s not his role to give direction or utter threats to German companies.”

Grenell, a former Fox News commentator and U.N. spokesman under George W. Bush, is the highest ranking openly gay official in the Trump administration. But opponents to his appointment complained about his history of disparaging remarks about women.

In a 2011 tweet, Grenell claimed Rachel Maddow “needs to take a breath and put on a necklace.”

In other tweets, he wondered if out lesbian Callista Gingrich “snaps on” her hair and suggested Hillary Clinton “is starting to look like Madeleine Albright.” 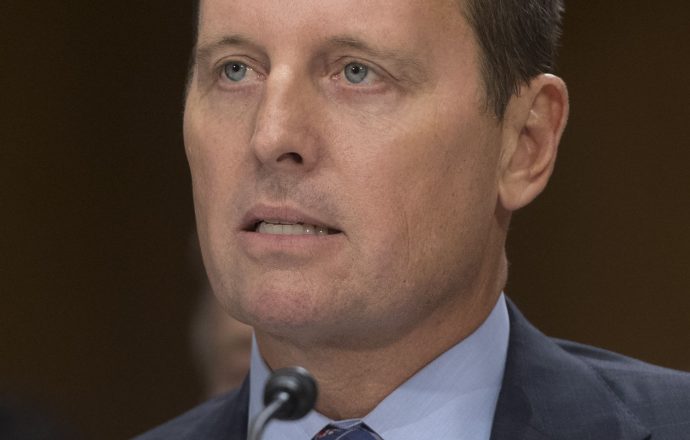