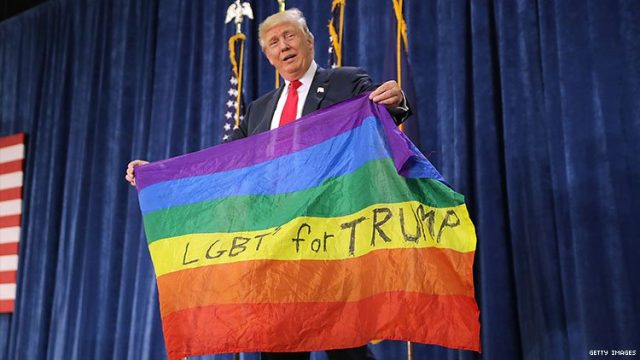 The Trump administration is set to launch a global campaign to decriminalize homosexuality in dozens of nations where anti-gay laws are still on the books, NBC News reported Monday. While on its surface, the move looks like an atypically benevolent decision by the Trump administration, the details of the campaign belie a different story. Rather than actually being about helping queer people around the world, the campaign looks more like another instance of the right using queer people as a pawn to amass power and enact its own agenda.

It almost goes without saying but the Trump administration does not have a great human rights record at home when it comes to LGBTQ+ issues. Advocacy group GLAAD has kept a record of the many times the administration has harmed LGBTQ+ people, from its transgender military ban to the reversal of plans to include LGBTQ people on the 2020 US census. And prior to his ill-conceived plan to address the HIV/AIDS epidemic, Trump’s administration had an abysmal record on addressing the virus.

The most telling detail of NBC News’ report is that his plan centers homophobic violence in Iran, who NBC News calls the administration’s “top geopolitical foe.” The plan has reportedly been spearheaded by the U.S. ambassador to Germany, Richard Grenell, who is also the administration’s top-ranked gay official, in response to news that a young gay man was hanged in Iran recently. Grenell has had his eyes on Iran for some time and just a week ago, he was trying to get several European nations to pass sanctions on Iran, unrelated to the country’s stance on homosexuality, to no avail.

Homosexuality has been illegal in Iran since the theocratic 1979 Islamic Revolution. By at least one Guardian account, since the exit of president Mahmoud Ahmadinejad in 2013, enforcement of anti-gay laws has softened somewhat. Homosexuality, according to the writer, is an “open secret” and most queer people fear homophobic reaction from fellow citizens more than the authorities.

Grennell’s sudden interest in Iran’s anti-gay laws is strikingly similar to Trump’s rhetoric after the 2016 Pulse massacre in Orlando, Florida. After the deadly shooting, Trump used the 49 deaths as a way to galvanize support for an anti-Muslim agenda rather than find a way to support LGBTQ+ people. In pushing for immigration restrictions and a Muslim ban, Trump argued, he was the true pro-LGBTQ+ candidate. Rather than honor those who died, Trump used the tragedy as a way to stoke fear among the American people, and Grennell is taking similar actions with Iran — trying to reach an economic goal by painting the administration’s opponent as anti-gay.

“We know Trump is very focused on Iran and is looking for ways to demonize it in the public opinion and this is one area where you know the US and European countries see eye to eye on Iran,” Josh Lederman, who reported the original NBC News story, told Out in a phone interview. “So it makes for them to focus strategically on that rather than sanctions, where there’s been a big gulf between the U.S. and its allies.”

The truth is, this is part of an old colonialist handbook. In her essay, “Can the Subaltern Speak?” postcolonial theorist Gayatri Spivak coined the term “White men saving brown women from brown men” to describe the racist, paternalistic process by which colonizing powers would decry the way men in power treated oppressed groups, like women, to justify attacking them. Spivak was referencing the British colonial agenda in India. But Grennell’s attack might be a case of white men trying to save brown gay men from brown straight men, to the same end.

There are several signs that this decision is denoted in a colonial sense of paternalism rather than any true altruism. According to the report, the decriminalization campaign is set to begin in Berlin where LGBTQ+ activists from across Europe will meet to hatch a plan that is “mostly concentrated in the Middle East, Africa, and the Caribbean.”

That sentence alone should set off several alarm bells. First of all, the Middle East, Africa, and the Caribbean are huge geopolitical entities. Attitudes toward gay people differ greatly among countries and regions within those entities and attempting to gather a room of European activists on how to deal with queer issues in those regions is the definition of paternalism.

According to Lederman, the names of the activists attending the dinner, scheduled for Tuesday night in Berlin, are not yet known, but they hail from a dozen European countries, including countries from Eastern and Central Europe, where legal protections for LGBTQ+ people are weaker than in Western Europe. The names of the activists are being concealed as some are not ready to be identified publicly.

Lederman says that the sentiment on the ground is that the initiative is “very much a work in progress” and that they made the announcement while “there’s still a lot of strategy being worked out.” However, Lederman did confirm that as of right now, activists from countries in the regions being discussed — from Africa, the Middle East, and the Caribbean — are not currently being brought to the discussion table.

“They’re not sure what it’s going to look like as it gets fleshed out,” and while he says they could possibly invite people from affected regions “at a future date,” he says right now they’re still working out details.

Lederman plans to sit down with Grennell as well as several activists who attended the dinner meeting in Berlin for an interview that will air on MSNBC at a later date.

Though plans may or may not exist to invite local LGBTQ+ advocacy groups to the table, that they are not there at the plan’s inception is dangerous. Inviting European activists to solve problems in the Middle East, African or the Caribbean — which, once again, are not monolithic in the slightest — is a toothless effort, more PR than progressive.