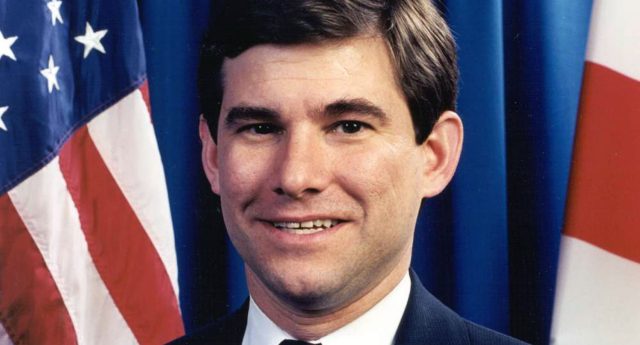 After Trump said this week that he wouldn’t appoint a Supreme Court justice to attempt to roll back same-sex marriage, but one of his prospective picks has actually made some pretty disturbing comments.

Despite President-elect Trump saying that same-sex marriage is “settled”, he also said he wanted to appoint justices who would challenge the 1973 abortion rights ruling Roe v Wade.

One of those conservative judges is William H Pryor Jr, who has in the past suggested that same-sex couples should be punished with jail for having sex in their own homes.

The former Alabama Attorney General upheld a law in 2003 in Texas which criminalises consensual gay sex, comparing it to “polygamy, incest, pedophilia, prostitution, and adultery”.

Arguing that LGBT people were not protected by the US Constitution, Pryor said states should be able to criminally charge gay people for having sex.

“This Court has never recognised a fundamental right to engage in sexual activity outside of monogamous heterosexual marriage, let alone to engage in homosexual sodomy,” wrote Pryor.

“Such a right would be antithetical to the ‘traditional relation of the family’ that is ‘as old and as fundamental as our entire civilisation.”

“Texas is hardly alone in concluding that homosexual sodomy may have severe physical, emotional, psychological, and spiritual consequences, which do not necessarily attend heterosexual sodomy, and from which Texas’s citizens need to be protected,” he wrote.

So Trump could appoint a justice who has bee described by Lambda Legal as “the most demonstrably anti-gay judicial nominee in recent memory.”

Kevin Cathcart, Lambda Legal’s executive director adds that Pryor blocked a law which would have allowed same-sex couples in Florida to adopt.

“Several judges on the appeals court wanted to hear the case and said the law raised ‘serious and substantial questions,’ but William Pryor kept that from happening,” wrote Cathcart.