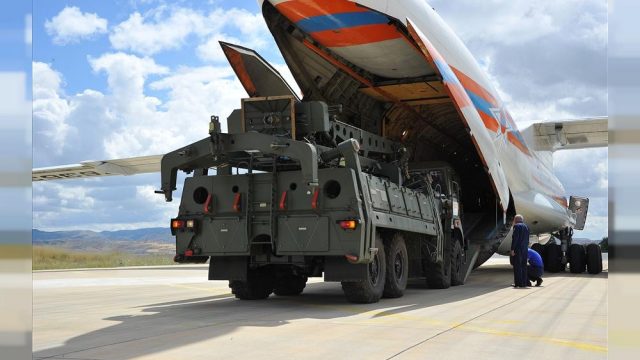 Turkey has received its first shipment of a Russian-made missile defence system, the Defence Ministry confirmed in a statement, fanning tensions with the US and itching the country closer to potential sanctions.

The first part of the S-400 Long-Range Air Defence Missile System was flown to a military air base near the capital Ankara.

It comes just two days after the US warned again that sanctions could be imposed on Turkey if the country went ahead with the delivery of Russian equipment.

Under legislation known as Countering America’s Adversaries through Sanctions Act (CAATSA), which targets purchases of military equipment from Russia, the US administration should select five of 12 possible measures.

One of them would be removing Turkey from a F-35 joint strike fighter programme.

The US argues that the S-400 could be used to gather data on the capabilities of the F-35, and that the information could end up in Russian hands. They also refute Turkey’s argument that it could not acquire a similar system anywhere else.

“We offered the opportunity to them to buy the Patriot [air defence system] numerous times in a more generous package than we’ve offered anybody else, and they did not sign up for it,” Katie Wheelbarger, the acting assistant secretary of defence for international security affairs, said.