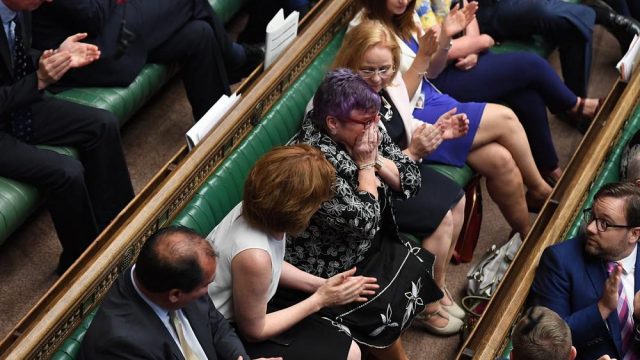 Moments of unity are increasingly rare in Britain’s fractured parliament, but one MP’s personal loss brought all sides together, and in doing so, may help countless families in their darkest moments.

Carolyn Harris’ ascent to the corridors of Westminster is a far cry from the script politicos are so accustomed to reading. She wasn’t a student politician, nor a cashed-up lobbyist before being parachuted into a seat – she was a working Mum, trying to make ends meet for her family in Wales.

“I was a barmaid and a dinner lady. I never had any aspirations to be a politician. I was quite happy to be a mother and a housewife,” the 58-year-old told Euronews.

But long before she arrived in SW1, her life was ripped apart when she lost her eight-year-old son Martin almost 30 years ago.

“It was a road accident. I never ever envisioned that anything was going to happen to my happy little family. We were just plodding through life doing what all young couples with small children do and then literally the world came to an end and we fell into a black hole,” Harris recounts.

The devastated mother, still deep in mourning, was yet to experience the aftershock of the tragedy.

“The undertaker, who had been absolutely fantastic, turned up with a bill in a sealed envelope. I opened this envelope and it was, at the time, £1,750 and you may as well have said it was £2 million because we weren’t in a financial position to pay that. It was something we were never able to do,” she recalls.

Friends of the family organised a collection at the local pub but the fundraising efforts fell short. It was up to the Harris’ husband, who just weeks before had lost his young son, to walk to the local bank and ask for a loan.

Stories like hers are not uncommon. Every year in England alone, an estimated 3,800 children die under the age of 18 – there are a further 2,700 stillbirths. Bereaved parents can find themselves facing bills of thousands of pounds for burial or cremation fees which can vary widely across the country.

Turning loss into a legacy

Harris went on to work with charities and in social care, and she says it was Martin’s memory that allowed her to build up the courage to enter the world of Westminster.

When she arrived, freshly elected to represent to the coastal and largely working-class city of Swansea, it didn’t take long for Martin’s memory to provide an impetus. It was a memory that drove Harris as she began knocking on some of the country’s most powerful doors.

“It took me 28 years to talk about it. But when I arrived in Parliament, I stood up in the chamber and asked ‘Is there any way at all that we can support bereaved parents?,” she said.

What would follow would be an intense 18 months of navigating the Palace of Westminster’s gothic corridors, familiarising herself with the creaking mechanics of Britain’s civil service.

It was April 2018 that marked a turning point; a letter of support arrived from an address opposition MPs don’t often see in their in-tray.

“Dear Carolyn. I was incredibly moved by your campaign and agree that it is not right that grieving parents have to worry about how to meet funeral costs for their lost child. There is nothing that can comfort bereaved parents whilst they struggle with the horror of losing a child, but I am glad the Government can now remove this one burden. Yours ever, Theresa”

The former dinner lady turned Labour legislator had won. Her tireless advocacy, fuelled by her own personal experience, had convinced Conservative Prime Minister Theresa May to back the changes. The Children’s Funeral Fund was to become a reality with the full support of 10 Downing Street.

A very public thank you

The Prime Minister’s letter explained that some time would be needed to prepare the necessary legislation to ensure a smooth rollout. But when a start date was confirmed earlier this month, the memory of Martin would stun the stuffy chamber of parliament as Harris paid tribute to those who helped her deeply personal battle.

“I understand from the 23rd July, the Children’s Funeral Fund will be operational. I thank everyone involved, the organisations that have supported me, colleagues who have encouraged me, my family, who like me, have had to revisit our loss, my team who have held my hand and you Mr Speaker for your understanding,” she said.

Mid-speech Harris caught the eye of the Prime Minister.

“Martin’s Fund is a legacy for my son and will be a comfort to every parent that will need to use it in the future. So from the bottom of my heart, thank you,” she choked, as politicians of all stripes erupted into applause.

After a brief acknowledgement from Speaker John Bercow, the Prime Minister, now knowing this will also be part of her legacy as her time in No 10 comes to an end, paid tribute to her friend on the benches opposite.

“Can I commend the honourable lady. This was born out of personal sadness but there are many families who will in the future benefit from the passion, commitment and determination she has shown in championing this issue. She said sometimes she’s been impatient, well sometimes you have to be impatient. Because it’s that impatience that spurs others on.” said May, pausing for a moment before placing her hand on her heart.

“We share, and are concerned about her own personal sadness that she went through. But she has taken that and put it to good benefit for families up and down the country,” concluded the PM.

In a country polarised by Brexit and a growing gulf of brinkmanship, this was a moment, albeit brief, when emotion charmed the mob. As one of Harris’s Tory opposites, Tracey Crouch, quipped to her online followers, “If you have ever questioned why anyone would go into politics, this is why.”

This week marks the start of the fund that’s been hard fought for.

The fund will be available regardless of the family’s income, and will also include a contribution towards the cost of a coffin.

The only conditions for the scheme are that the child is under 18 at the time of death or is stillborn after the 24th week of pregnancy and that the burial or cremation takes place in England. It is not means-tested, and the residency or nationality of the deceased child, or of the person organising the burial or cremation, will not be relevant in determining eligibility.

Finally, it brings England into line with other parts of the UK. Both the Welsh Government and the Scottish Government have established schemes, under devolved powers, to make financial support available to providers of burial and cremation for children.

For Harris, who was once labelled the “mad Welsh woman” by a displeased corporate lobbyist because of her dogged persistence – the fight isn’t quite over.

A lesson in fighting for your beliefs

It’s not lost on Harris just how far she has come. Through humble beginnings, crippling loss and a political system where the deck is stacked against the likes of her, she has won. Her personal tragedy the catalyst for major legislative change across the country.

Harris is insistent she should not be an exception, as she puts it, “I was a barmaid and dinner lady, if I can do it, anyone can!”

“I’ve had imposter syndrome my whole life. Don’t be like me, have confidence in yourself! Every woman, man, child in this world should give their dreams that go, because you never know what you’ll achieve.”