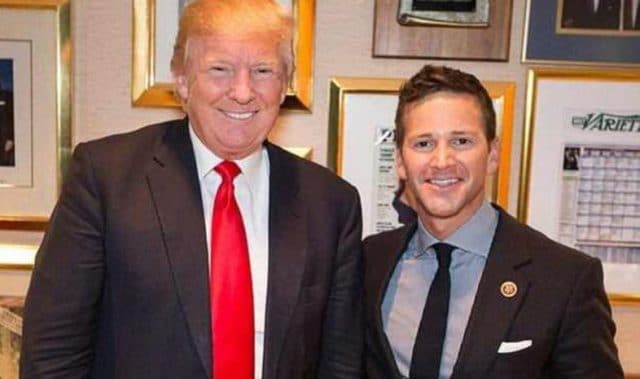 Twitter reportedly blocked the account of “Kenneth in the 212” blogger Kenneth Walsh after he published alleged footage of homophobic former Congressman Aaron Schock filming himself in the buff, reports Towleroad.

The video, which you can see for yourself here, originated on Twitter and remains live on the social media platform.

“Don’t have a lot of time to flesh it out, but a dissertation could be written about how Twitter has allowed the harassment of marginalized people of all kinds by everyone up to the so-called president of the United States, yet they have blocked my account for allegedly ‘harassing’ Aaron Schock,” Walsh wrote. “Yes, I’m talking about the same Aaron Schock who was leading a double life as a sexually active gay man while spending his career on Capitol Hill supporting legislation to legally harass LGBTQ people before getting run out of town, forced to pay back more than $100,000 in misappropriated funds. So what I’m now gathering is that Twitter is the right place to go if you’re a white supremacist or feel like going after after women — a study shows one is harassed every 30 seconds on the social-media platform, just ask Leslie Jones— but it isn’t the right venue for pointing out political hypocrisy.”

Hey @aaronschock
I just saw your jack off video and pictures. Ever thought about being in a movie?

Twitter activist Mrs. Betty Bowers called out Schock’s hypocrisy after photographs were taken of the former congressman hanging out with a group of gay men at the Coachella Music festival.

To go from voting against gay rights, denying he’s gay, saying he burned a belt just because it looked gay, to giving handjobs at music festivals and presenting hole on video, I’ve seen comings-out slightly more gradual than @aaronschock.

Activist James Duke Mason wrote at the time: “Normally I wouldn’t comment on something like this, but I am just infuriated by these images of former Republican (and anti-gay) Congressman Aaron Schock partying with a group of gay men at Coachella. The fact that he would think he could show his face in public, particularly when he has NEVER renounced or apologized for his votes against gay marriage, gays in the military and against anti-discrimination laws is astounding. My intention isn’t to out him or target him personally, but simply to point out the hypocrisy. I saw him at a recent gay social event in West Hollywood and shook his hand before I even knew who he was; he should really be ashamed of himself. And the gays who associate with him without calling him out should know better. It really is a disgrace.”