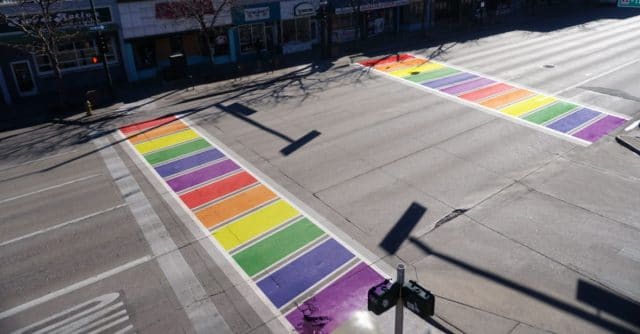 It may be a small step (pun intended), but a permanent installation of rainbow crosswalks goes a long way. That may be my opinion, but I believe others may agree.

May they be in a gayborhood like I saw during on of my trips to Philadelphia (a little faded during September, but still visible). 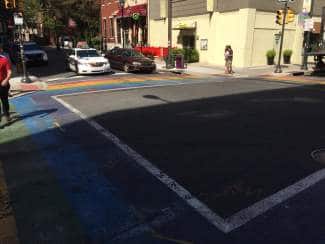 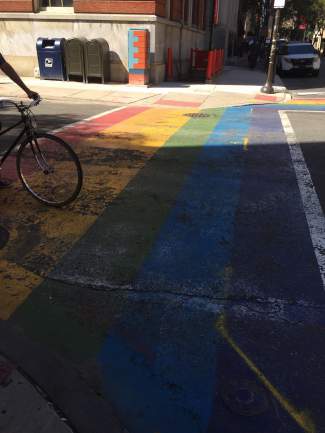 or the crosswalks in Vancouver, British Columbia, Canada accompanied by rainbow picnic tables, 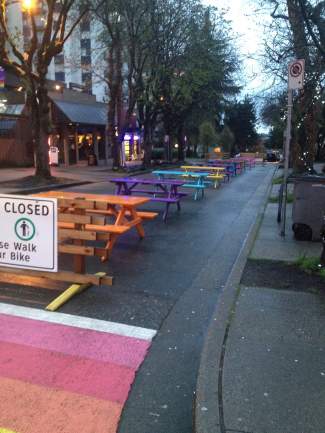 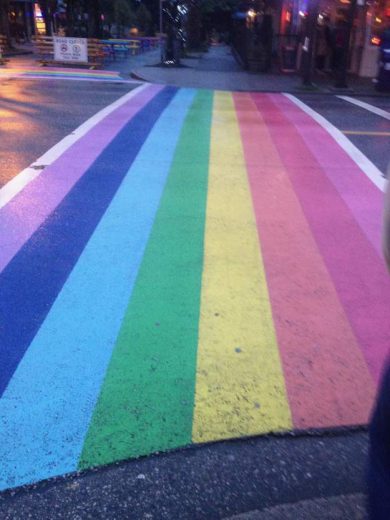 A simple paint job puts a smile on the face. It’s also a statement that we are here.

Every year more communities are added to the permanent rainbow crosswalk club. Up next to join? Phoenix!

Phoenix will join a nationwide trend of painting crosswalks with a rainbow design to celebrate the local lesbian, gay, bisexual and transgender community. Three of the largest LGBT organizations asked the city to install two rainbow crosswalks in Phoenix to convey permanent support for the community. The City Council voted unanimously (with council members Sal DiCiccio and Jim Waring absent) Tuesday April 24, 2018 to allow the crosswalks if the groups foot the bill for the installation and maintenance, which they’ve offered to do.

The new crosswalk designs will be displayed at Seventh and Glenrosa avenues and Central Avenue at Portland Street. That’s near the Parsons Center for Health and Wellness, where several LGBT organizations are located. – azcentral.com

The Arizona Central elaborated that other cities in the US that have installed permanent rainbow crosswalks are Atlanta, Houston, San Antonio, San Francisco, Seattle, Tucson, and Washington, D.C.. They left out Philadelphia! 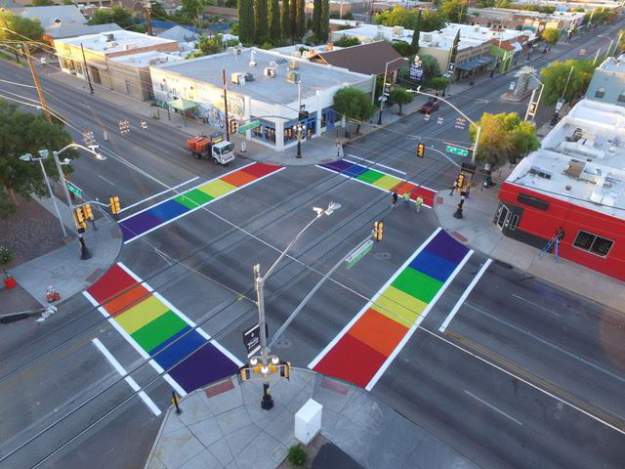 The Denver Channel is quick to trumpet that South Broadway to get Rainbow-Striped Crosswalks in Time for Denver Pride.

Organizers say they’ve raised most of the money they need to convert two crosswalks at South Broadway and West Irvington Place into a rainbow-striped symbol of support for Denver’s LGBTQ community.

The initiative is a joint venture between Buffalo Exchange, the Baker-Broadway Merchant Association and city councilors Jolon Clark and Robin Kniech.

Buffalo Exchange holds its annual “crosswalk walk-off” fashion show at that intersection during Denver Pride. This year’s event is set for June 15 and organizers plan to have the crosswalk finished by then.

Organizers plan to use a permanent thermoplastic material for the design rather than paint. 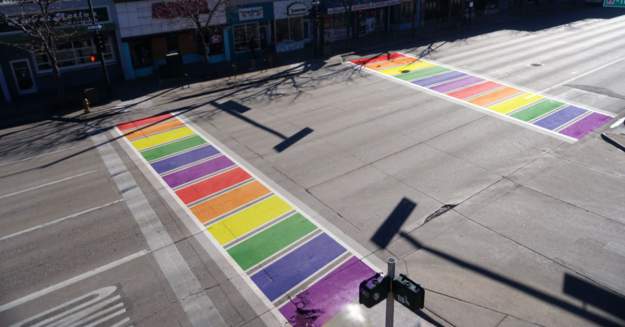 To learn more about the Denver project, visit https://broadwayrainbowcrosswalk.weebly.com/ and if you know anyone in Denver that can hook us up with some good seats to view the fashion show …

Not to be left out, other Canadian cities are hopping on board the paint crew. Granted this town is much smaller than Tuscon, Philadelphia, or Denver, but when you’re a town of 2,000 people, how many crosswalks do you have? And now, if you’re painting two of them, well that’s a big percentile of your crosswalks being all LGBTQ-ified.

Deputy Mayor James Cadigan says councillors took it upon themselves to bring the motion forward and all seven members supported it, adding that the crosswalks will likely be in place in a few weeks.

The approach is in stark contrast to a simmering debate in Springdale, a Newfoundland community of about 3,000 people that attracted national attention after its council voted against painting a rainbow crosswalk.

Looks like it might have been part of a step to say our town of 2,000 is better at inclusion and acceptance than your town of 3,000, but then again, maybe it’s just people unanimously being humans.

In looking at the funding for these crosswalks, LGBTQ organizations are hefting the bill in the larger cities. Since the small union of Logy Bay-Middle Cove-Outer Cove is establishing these most likely temporary rainbow crosswalks, they mat be covering the cost.

Do you think rainbow-painted crosswalks serve a purpose?

Do you think cities should pay for the upkeep of the rainbow crosswalks or should it be up to the LGBTQ community?

Other than the cities we mentioned, where have you seen them?

What did you think when you saw your first rainbow-painted crosswalk in person?