A US man is charged with shooting two men because they were gay, according to prosecutors.
Detroit man Demetris Nelson, 26, is accused of attempting to rob and then shooting Brian Anderson, 31, and Malcolm Drake, 26, on Saturday. Anderson died of his wounds while Drake was critically wounded.
Nelson used the Grindr dating app to target, contact and find the two men, according to the Wayne County Prosecutor’s Office. 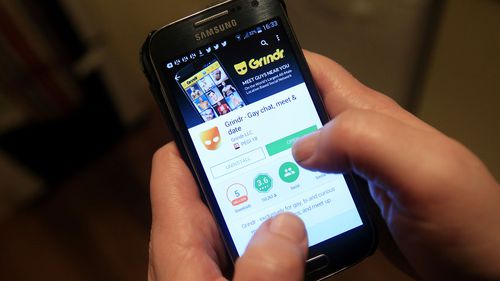 Grindr is a popular dating app for gay men. (AAP)

Detroit Police arrested Nelson on Monday, according to a statement from the prosecutor’s office. Nelson was arraigned on Friday on charges of first-degree murder, felony murder, assault with intent to murder, assault with the intent to rob while armed and four counts of felony possession of a firearm, according to prosecutor’s office spokeswoman Maria Miller.
“To some, this will be just another hateful and violent act in America,” County Prosecutor Kym Worthy said in the statement.
“They will read about this case and continue to go about their day. To me, that is quite tragic.”
The prosecutor’s office said the case was assigned to Jaimie Powell Horowitz, a special prosecutor with Fair Michigan Justice Project, a collaboration between the prosecutor’s office and Fair Michigan Foundation.
The project assists Michigan law enforcement and prosecutors in solving serious crimes against lesbians, gays, bisexuals, and transgender persons. Horowitz declined to comment to CNN.
“We are saddened and outraged by this despicable crime. This case is just the most recent example of how members of Detroit’s LGBTQ community are too often targets of violence,” Alanna Maguire, president of the Fair Michigan Foundation, a non-profit civil rights group, said in a statement.
Nelson is expected in court on July 26 for a probable cause hearing. Court records did not say whether Nelson has entered a plea and CNN has been unable to contact Nelson’s attorney.