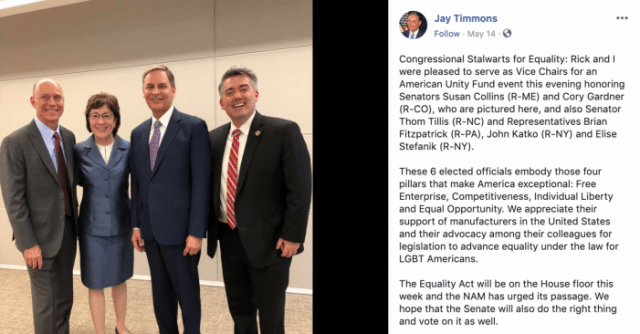 The $250 per person fundraising event, hosted by the leadership of the American Unity Fund (AUF), was held last week at the D.C. office of Hogan Lovells, a law firm.

AUF is an organization “dedicated to advancing the cause of freedom for LGBTQ Americans by making the conservative case that freedom truly means freedom for everyone,” according to their website.

Three U.S. Representatives and three U.S. Senators were honored as “Pro-LGBTQ Republican Members of Congress” at the event, according to an invitation obtained by the conservative North Carolina website Daily Haymaker. 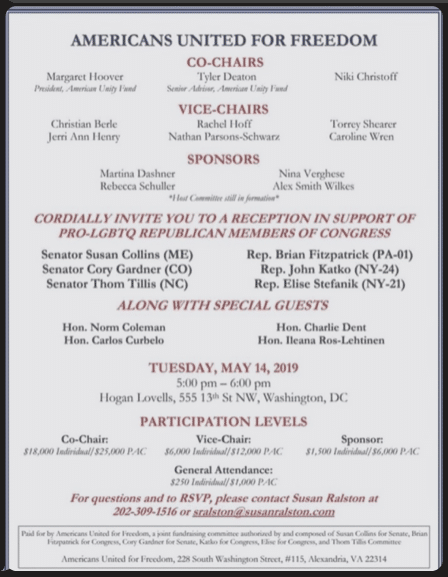 The invitation uses the name “Americans United for Freedom,” which, in the small print, is explained as a joint fundraising group for the six politicians honored at the event.

Two of the senators have gotten people’s attention, but not for being “pro-LGBTQ.” Cory Gardner (R-CO) and Thom Tillis (R-NC) were honored at the event, but neither of them has a good record on LGBTQ issues.

Gardner got a score of 12 out of 100 on HRC’s Congressional Scorecard for 2017 and 2018. He refused to cosponsor the Equality Act and the Therapeutic Fraud Prevention Act (which would ban conversion therapy) in the Senate, as well as several other bills.

He also voted to confirm far-right judges like Neil Gorsuch and Brett Kavanaugh and anti-LGBTQ cabinet members like former Attorney General Jeff Sessions, who used his power to create a “Religious Liberty Task Force,” and Education Secretary Betsy DeVos, who rolled back protections for transgender students almost as soon as she got in office.

Daniel Ramos of One Colorado, an LGBTQ organization, said that Gardner “is neither a friend nor an ally for LGBTQ Coloradans.”

“In the last eight years during my time at One Colorado, he has never reached out to discuss policy or legislation, and has never attended one of our events,” Ramos said in a statement.

“If he was the LGBTQ ally that he claims to be, he would be enthusiastically supporting The Equality Act. He would be standing with the 15,000 transgender service members who are now unable to serve in the military. He would be working to strengthen Title IX protections instead of weakening them.”

Senator Tillis is about as bad as Gardner. He got a score of “O” on HRC’s Congressional Scorecard, refusing to co-sponsor the Equality Act and other pro-LGBTQ legislation, voting to confirm anti-LGBTQ judges and cabinet members.

While he voted against the Leahy-Collins Amendment for homeless LGBTQ youth, he did vote in favor of the Schatz Amendment for Social Security and veterans benefits for gay couples, so that’s something.

The Family Research Council, an anti-LGBTQ hate group, also has a Congressional Scorecard, and both Senators Tillis and Gardner got a “100” from that organization.

The other senator honored at the event was Susan Collins (R-ME), who has co-sponsored and voted for some legislation that helps LGBTQ people, although she has been a solid vote for Donald Trump’s anti-LGBTQ nominees.

At the event, National Association of Manufacturers President Jay Timmons posted a picture with Senators Collins and Gardner to Facebook. 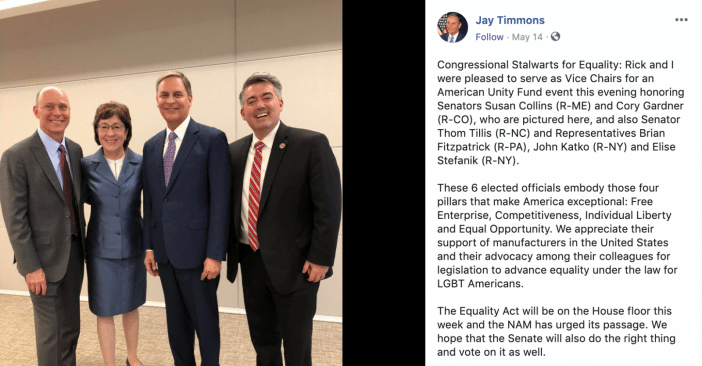