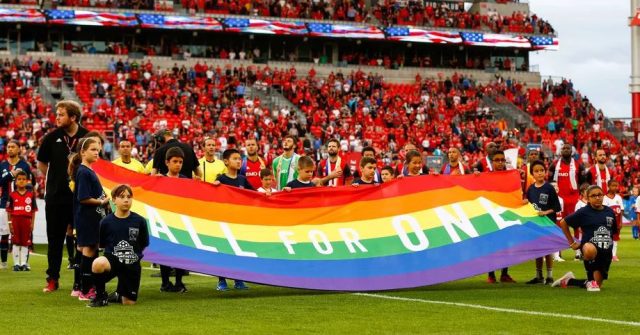 The New England Revolution, Boston’s Major League Soccer team, will hold a Pride Night during their June 29 game against Houston Dynamo at Gillette Stadium. The event will be one of 18 events held by the 24 MLS teams around Pride month.

While the New England Revolution event will take place three weeks after Boston Pride, it’s still part of the city’s two-month long calendar of Pride events, including a Pride Night at Fenway Park. Details of the event remain unclear, but in past years the Revolution’s captain wore a custom rainbow armband and the pitch and stadium flew rainbow flags.

“The Revolution have always welcomed a diverse community of soccer fan,” New England Revolution president Brian Bilello said on the team’s website, “We’re proud our community has great supporters… who share our passion and we’re excited for the opportunity to remind our fans and all of New England that our community is open to everyone.”

The team currently offers rainbow-colored Pride apparel including a men’s T-shirt, a women’s T-shirt and an adjustable cap.

The Pride night will actually be the third to occur at Gillette Stadium. At last year’s Pride Night, patrons who purchased a special package got a scarf with “All Fans Welcome” written in rainbow colored letters. Part of the ticket proceeds benefited the You Can Play campaign fighting homophobia in sports.

The Pride nights are part of MLS’ Soccer For All campaign which opposes bullying and discrimination via programs, events, clinics and fundraisers aimed at poor, disabled, LGBTQ and other marginalized communities. MLS has declared all of June “Soccer for All Month” and released the following promotional video:

Three MLS teams have already held their Pride Nights — The Los Angeles Football Club on May 24, Vancouver White Caps on May 25 and Sporting Kansas City on May 29 — but here’s a list of the remaining nights arranged chronologically. Click on the team names for more details.

Editor’s Note: The original version of this report missed the DC United event on June 26. We have added it, and thank our readers for calling our attention to the oversight! We hope in the future DC United will promote events like these on their own websites for everyone to see. Also: Austin FC, an MLS team, doesn’t currently host a Pride Night, but the USL team, Austin Bold FC, does, on June 8.