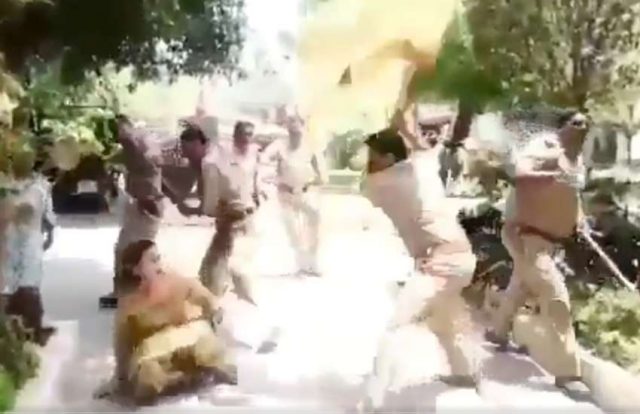 Police in India opened a baton charge on two groups of trans people today (13 June), with several detained as a result.

According to witnesses, two rival groups of trans people had a dispute outside Lalkurti police station in Meerut, Uttar Pradesh.

When violence between the two broke out and escalated, authorities violently carried out baton charge on members of the groups outside the police station premises.

According to Piyush Rai, a journalist based in , the incident broke out after two trans groups collided in the same ‘turf’ this afternoon.

Rai explained that the two groups have ‘designated areas where they move around, perform, and seek money from people during moments of celebration. Like weddings, news-borns, et cetera.’

Both have patches in the city of Merrut, a city in northern India.

According to Rai, one of the groups encroached the territory of a ‘rival’ group which ‘led to a dispute.’ Allegedly, both sides ‘had approached the local police.’

On the intersection of the two turfs, members ‘began fighting among themselves’ outside Lalkurti Police Station, situated on Mall Road.

As a result, ‘police opened Lathi charge after the two groups began fighting among themselves at the police station,’ Rai said.

In albeit pixellated mobile phone footage posted by Rai on Twitter, police hit the trans people with lathis (batons).

Many officers in the footage are singling out members by backing them into walls. Meanwhile, other members visibly fled the scene. Officers checked vans parked nearby in the footage’s end.

A Lathi charge, otherwise called a baton charge, is a for dispersing crowds of five or more people. Some Indian police forces use lathis around five feet long, but sizes differ.