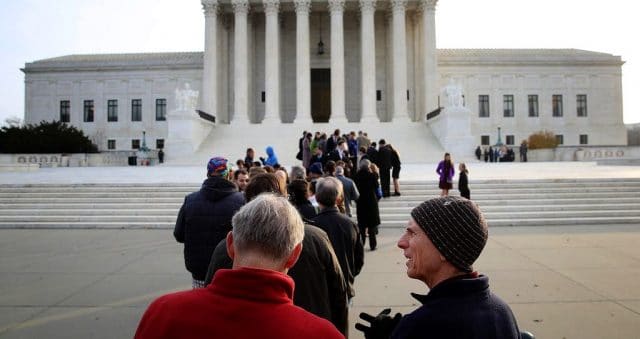 AUSTIN — The U.S. Supreme Court declined to take up a Texas Supreme Court ruling that prevented same-sex spouses from having the same workplace insurance benefits as heterosexual couples.

In a unanimous ruling in June, the Texas court acknowledged that same-sex marriage was legalized in 2015 with Obergefell vs. Hodges, but the justices said the decision did not make clear the additional rights of gay couples, in this case those who work for the government.

The two conservatives argued that city employees did not have a “fundamental right” to receive government-subsidized spousal benefits and that it was “perfectly constitutional” to extend benefits to some married couples and deny them to others.

The Texas Supreme Court agreed that the Obergefell vs. Hodges decision did not address that specific issue.

“Pidgeon and the mayor, like many other litigants throughout the country, must now assist the courts in fully exploring Obergefell’s reach and ramifications, and are entitled to the opportunity to do so,” Justice Jeffrey Boyd wrote in the Texas Supreme Court’s decision, which sends the case back to the original trial court in Houston. “We reverse the court of appeals’ judgment, vacate the trial court’s temporary injunction order.”

The president of Texas Values and an attorney for Pidgeon and Hicks called the U.S. Supreme Court’s action an “incredible early Christmas present.”

“We’re grateful that the U.S. Supreme Court has allowed our lawsuit to go forward,” Jonathan Saenz said in a prepared statement. “Mayor Annise Parker defied the law by providing spousal benefits to same-sex couples at a time when same-sex marriage was illegal in Texas, and we intend hold the city accountable for Parker’s lawless actions and her unauthorized expenditures of taxpayer money.”

“We’re pleased that the U.S. Supreme Court let stand the Texas Supreme Court ruling that the right to a marriage license does not entitle same-sex couples to employee benefits at the expense of Texas taxpayers,” Paxton said in a news release.

City employees have continued to receive spousal benefits regardless of sexual orientation while the lawsuit proceeds.

Houston Mayor Sylvester Turner said in June that Houston would continue to be an inclusive city that respects the legal marriages of all employees.

“Marriage equality is the law of the land, and everyone is entitled to the full benefits of marriage, regardless of the gender of their spouse,” he said.

Houston Democratic Sen. Sylvia Garcia said asking courts to interfere with policies and targeting a select few is an attack on opportunity and economic security.

“The policy is simple equality — no more, no less — for our public employees. As someone who has served at the city, county and state, I have always believed and argued that cities and local governments know what is best for their own communities.”

The city of Dallas extends spousal benefits to same-sex couples, a public information officer confirmed. She added that neither the Texas Supreme Court decision or the U.S. Supreme Court’s decision to not hear the case affects current policy.

“The Obergefell ruling is still the law of the land and not only does it say same-sex couples have the ability to get married, it also specifically says they are entitled to the entire constellation of benefits that come from marriage,” Smith said. “It still clearly says that same-sex couples be treated the same when it comes to marriage.”

The U.S. Supreme Court’s action came without dissent or comment.