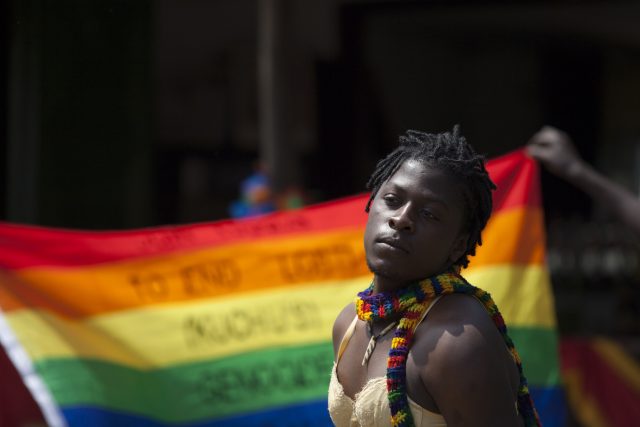 Police officers in Uganda strap on some kinky boots for a very different march.

If a gay man were to wear high heels and other female clothing in Kampala, Uganda, they would very likely be attacked.

So it was unusual to see dozens of male police officers doing just that to raise awareness of gender violence.

In a sort of beautiful display of gender fluidity, the policemen walked in heels through the streets of the capital city as part of a 16-day campaign to end attacks on women.

Francis Ogweng, who opted for a pair of black leather boot stilettos and red handbag, said: ‘It is not easy to walk in the shoes of women. I tried it today, I have seen myself. It’s hot.’
Some officers took to it effortlessly, for some it was a little more difficult.

The event, dubbed ‘Walk A Mile In Her Shoes’ was organized by the Gender Ministry.

In 2013, it was reported 70% of women in Uganda said they had experienced domestic violence from their partners.

Uganda is widely considered one of the worst places to be LGBTI.
Both male and female homosexuality is illegal in Uganda, with the latter only become a criminal offense in 2000.

It was only in September of this year when a girl, aged only eight years old, was arrested after being accused of ‘lesbianism’.

And during Pride, LGBTI people were beaten, brutalized, arrested, sexually assaulted, trans women’s hair was forcibly cut and trans men’s genitals were fondled during a police raid in August.