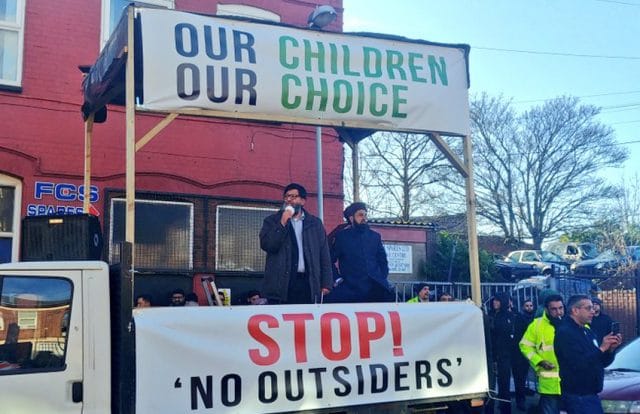 The UK’s high court has issued injunctions against people protesting outside schools over LGBTI-inclusivity lessons.

Birmingham city council had made the application after months of protests outside local schools.

The council made the announcement of the interim injunction .

These followed from similar demonstrations outside the nearby Parkfield Community School over the school’s No Outsiders program, which teaches LGBTI-inclusivity lessons.

Local parents opposed to the program in the majority-Muslim area said they felt primary school children were too young to learn about LGBTI issues.

The interim injunction covers a number of ways of stopping protests.

It covers the streets and sidewalks immediately surrounding the school, prevents people from handing out leaflets or flyers, and inviting others to protest or congregating outside schools.

‘I’m pleased that common sense has prevailed because children right across Birmingham should be free to attend school safely and without disruption,’ Ward said.

‘All our schools must be safe spaces and we will not tolerate the ongoing intimidation of parents, hard-working school staff and local residents.

‘We’ll continue to support the school and its staff and I would urge parents to take this opportunity to engage in constructive dialogue with the school about any concerns they may have.’

The protests have been making headlines since January, with several schools halting their LGBTI-inclusivity classes in response.

The demonstrations have been widely condemned by a number of public figures. This includes education secretary, Damian Hinds, who slammed the protests as ‘unacceptable’.

‘It is not right to protest in front of schools; it is frightening to children and disrespectful to hard-working teachers,’ . ‘[The high court injunction] will allow children to return to school and parents to continue peaceful and constructive discussions with staff.’

‘There is no reason why teaching children about the society that we live in and the different types of loving, healthy relationships that exist cannot be done in a way that respects everyone.’

In the past, the head of the UK’s school watchdog Ofsted has spoken in support of LGBTI-inclusivity lessons.

However, Esther McVey, a Conservative MP and party leadership candidate, was recently criticized for .

The No Outsiders program was introduced to Parkfield school by assistant headteacher, Andrew Moffat.

The teacher has won widespread acclaim for his teaching on LBGTI issues.

He was shortlisted for a global teaching award earlier this year and received an MBE in 2017.

In the past, Moffat has maintained that the demonstrators are a vocal but small minority. He says he has received overwhelming support from the majority of parents he had spoken to.

Last week, Moffat . He was joined by members of pro-LBGTI Muslim groups in leading the march.