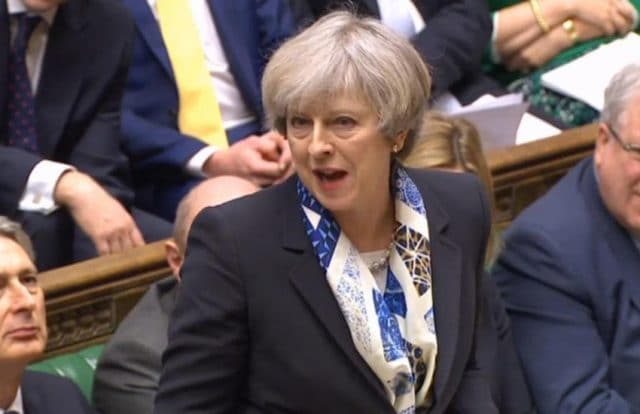 UK Prime Minister Theresa May has announced she will step down from Number 10 on 7 June after a Cabinet revolt over her final efforts to bring a Brexit deal to the House of Commons.

For months she shrugged off parliamentary defeats, negotiation failures, and calls from her own lawmakers to resign.

But the prime minister earlier today sat with Sir Graham Brady, chairman of the 1922 Committee of Tory backbenchers, to discuss her future where they consolidated the plans for her leave.

This came after ‘frank’ talks with senior lawmakers in her governing Conservative Party, where she agreed to timetable her resignation.

In the past, May had dangled the idea of her stepping down if lawmakers vote for her deal to withdraw the UK from the European Union.

Her past three deals and countless alternatives have failed. Effectively, this left her agreeing to depart whether her plan passes or not.

As sunshine poured in, the prime minister stood behind a podium in front of 10 Downing Street wearing a red a pantsuit and announced her resignation.

In the emotional speech, she said: ‘Ever since I first stepped through the door behind me as PM I have striven to make the UK work not just for a privileged few but for everyone and to honour the result of the referendum.’

May reflected on her obstinate tact concerning withdrawal negotiations. Adding: ‘I have done everything I can to convince MPs to back that deal.

‘It is now clear to me that it is in the best interest of the UK for a new PM to lead that effort,’ she said.

‘I am today announcing that I will resign as Conservative leader on Friday 7 June.

‘I have agreed with the party chairman that the process for electing a new leader will begin in the following week.’

She went onto call for her successor to deliver Brexit by striking a consensus among her fragmented party.

Ending her speech, as her voice cracked, she added: ‘I was the second female PM, but certainly not the last.’

As her departure is finalized, bringing an end to her two year and 315 day-long run, questions will quickly arise of her successor.

Boris Johnson, the former foreign secretary and a leader of the pro-Brexit campaign before the country’s 2016 referendum on leaving the European Union, said on Thursday that he would run for the leadership when it became available.

Under party rules, Conservative lawmakers will select two candidates. But the final call will go to the ballot of party members, about 120,000 people.