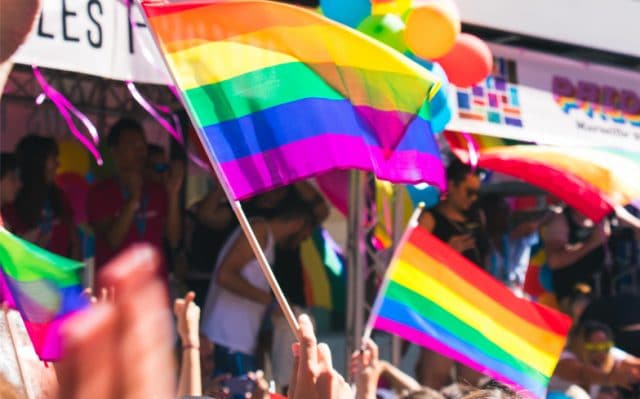 Over 8,000 people – including politicians, foreign diplomats and British ambassador, Judith Gough – sashayed in the country’s capital, Kiev, making it the biggest turnout the Ukrainian capital has ever seen.

Although there were hundreds of far-right protestors, this year’s Pride has been called the country’s “most peaceful” so far. Last year, 56 members of nationalist groups were arrested after spewing anti-gay hate, but only nine arrests were made this year.

Oksana Korchynska, a member of the Radical Party, told Reuters: “We are for God and Ukraine. For us it is important that people who have a sexual sin do not make propaganda out of it.”

A 17-year-old tattoo artist called Eduard, who took part in the parade, also told the publication: “Our desire is to convey to a majority of people that LGBT is normality. “I am taking part for the fifth time.

“Ukraine is making significant progress compared to previous years, security and organisation are much better.”

Shortly after the march, William B. Taylor – charge d’affaires at Ukraine’s US Embassy – voiced his support for the community, writing on Twitter: “We stand with all Ukrainians striving for equality and non-discrimination.”

Gough also wrote: “Thank you to the police and other law enforcement agencies for protecting today’s Pride event.”

LGBTQ rights in Ukraine have vastly progressed in recent years. In 2015, the Ukrainian Parliament made it illegal for employers to discriminate workers based on their sexuality, and one year later, donating blood was approved for gay and bisexual men.

Although same-sex activity has been legal in the country since 1991, LGBTQ people can’t adopt or get married, and can still be discriminated against for their sexuality in other areas such as goods and services.

Conversion therapy for minors is also legal and being trans is classified as a mental illness.