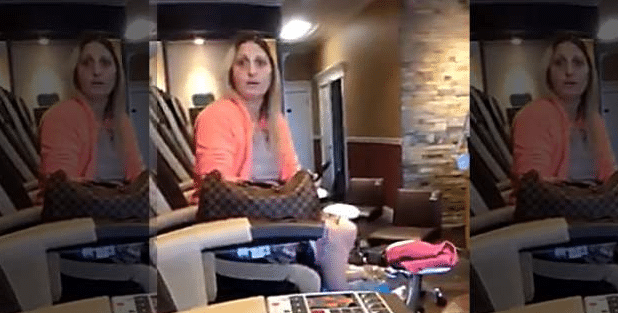 Facebook user Christopher Brown stopped by his favorite foot spa on December 30 to treat himself to some post-holiday pampering.

But shortly after he sat down for his mani-pedi, he became the target of a rude woman who called him “f*ggot,” “sissy” and “queer.”

The altercation began when Brown asked the woman if she would take her phone off speaker as she was carrying on a full voice conversation with her daughter via FaceTime. There were signs in the spa requesting customers to keep noise to a minimum.

Her response? According to Brown, she told her daughter, “Hold on, I need to take care of this f*ggot.”

That’s when he began recording the incident.

The woman demanded that the spa employees throw Brown out saying he had “harassed” her in asking her to turn down her volume.

When her demands aren’t met, she finally gets up to leave, telling Brown, “Keep recording sissy, keep recording because you probably wish you had a c*nt like me, right?”

And as she storms out, she unleashes a stream of homophobic slurs, “F*ggot, sissy, queer, fag – eat my p*ssy!”

In posting the video to Facebook, where it’s garnered over 218K views since last Thursday, Brown says he shared the incident to show that “even in the Seattle region, life isn’t always sunshine and rainbows for the LGBT community.”

He adds, “There’s still work to do folks. #resist.”

And please feel free to share this everywhere. We’d love to find out who this charming lady is.