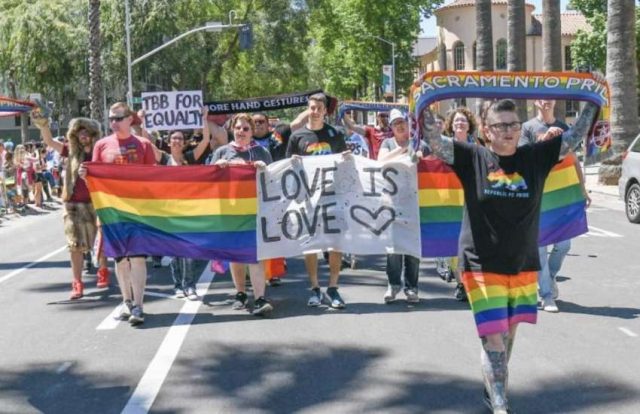 For the second year in a row, uniformed police officers will not be able to participate in Sacramento, California, Pride at the request of organizers.

The Sacremento LGBT Community Center asked city officers to participate in the parade without wearing their standard uniform.

The group argue that their presence while uniformed would make others feel uncomfortable.

The center organizes Sacremento Pride as an annual festival. This year, it’s scheduled for 8-9 June.

But in a statement on their Facebook page, the center asked that police officers who wish to attend during pride do not wear their uniforms.

‘To honor the pain and marginalization of community members who have been harmed by police violence,’ the statement read, ‘we have asked Sacramento Police not to participate in uniform for the 50th anniversary of Stonewall.’

The post then clarified that officers will be on duty during the parade march. Which begins on the corner of 8th and T street, just off Southside Park.

Marchers will then head downtown and end on Capital Mall, .

Moreover, the post then added that there will be ‘private security and identifiable community safety monitors’ throughout the march.

In a statement sent to local newspaper, , the police department said it was disappointed that the center ‘does not want our officers attending upcoming public community events while in uniform.’

‘We support our LGBTQ officers who proudly serve our community on a daily basis,’ it added.

‘Sad that inclusion doesn’t really mean everybody,’ Captain Norm Leong of the Sacramento Police Department wrote in a Facebook post.

‘Worse part is to hear how much this hurt our LGBTQI officers who looked forward to participating.’

Moreover, the center went onto add an amendement to their original post. The group clarified they collaborated with authorities on the decision.

‘They didn’t participate last year at all, welcoming them to participate as members of the community, out of uniform, this year was a compromise.

‘Rejection of the compromise fails to acknowledge the pain and historical abuses police institutions have inflicted on the most marginalized in our community.

‘This is not the end. This is a step in the journey toward better inclusion, affirmation and safety for all LGBTQ+ people here and beyond.’