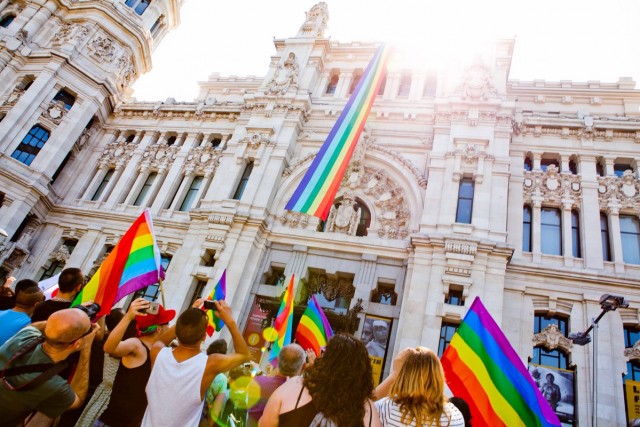 This post is an announcement about the upcoming Gay Pride parade in the city of Valencia (Spain). Since quite a few years ago, we are having these yearly parades all over Spain and this is a very good news. We all love when these events are made and furthermore they are loved not only among the gay community but also most of the citizens of Valencia.

It is remarkable to say that Spain is one of the most gay friendly countries in the world. Same gender marriage is legal without any restrictions and with the same rights than their hetero counterparts and gay life is open and well seen among the most part of the population. Since the last year, the gay flag is waving in the town council next to the EU, Spain and Valencian flags:

Of course there are still some people who don’t agree with this but they are the minority now. A hated minority by the rest. Most of the population loved the initiative taken by the town council and the gay flag is being waved in more and more town councils all over Spain.

Gay pride parades in Spain are not only about the parade and walking around the city. There are many events you can check here (Spanish language):

In these events there are games for kids and many other activities which are not designed only for the gay people, but also for any other citizen who wants to join the party and enjoy the Gay Pride.

So, Spain is a country where gay and hetero communities live together and happy and the incidence of homophobic attacks is decreasing to a point where they are not higher than any other kind of attacks then some voices are being raised to stop these events because they think are useless nowadays that the gay community enjoys the same rights as any other citizen. Are they right? Absolutely NO.

These parades are there to remind that there are many other places where you can go to prison or even executed for having a different sexual choice. Also, although many people don’t remember now, this was happening in Spain 40 years ago and until the last 10 years the gay community didn’t enjoy the same rights as the heteros. They could not marry, and being a gay couple didn’t qualify for many social benefits that a hetero couple would do. Fortunately, this has ended now.

So now, besides being a chance to remind people about the past and the fact that in many other places this isn’t the same, it is a way to express that the gay community is not a closed one. They also make many activities not oriented exclusively for gays and they also participate with kids in many games so that they learn since they are young that being gay is nothing to be ashamed of, it is not freakish and it is not just a sexual thing.