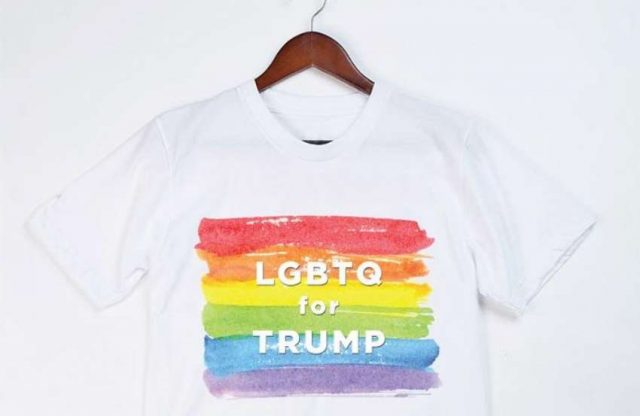 In a move that has baffled people, US President Donald Trump has unveiled a ‘LGBTQ for Trump’ t-shirt.

The slogan emblazoned over a watercolor rainbow flag retails for $30, but is currently on sale for $24. It is available just days before the start of the 2019 Pride season on the Trump/Pence merchandise website.

‘Show your pride and your support for Trump with this exclusive equality tee,’ the website reads.

While Trump promised to support the LGBTI community during his 2016 election campaign. During his campaign he said he would ‘do everything in my power to protect our LGBTQ citizens from the violence and oppression of a hateful foreign ideology.’

But since becoming president he has introduced a number of anti-LGBTI laws. They included banning trans troops from serving in the US military and He is also considering allowing homeless shelters to deny service to trans people.

‘The Trump Administration is trying to pull yet another con job on LGBTQ Americans, but like their other desperate ploys, this idea will fall flat,’ said GLAAD’s chief program officer, Zeke Stokes.

‘Trump should hold the sales pitch and try issuing a statement honoring June as National Pride Month and the countless of LGBTQ Americans who fought tooth and nail for the level of acceptance our nation sees today.’