Home Gay Life US warns it will destroy any Iranian drone too close to its... 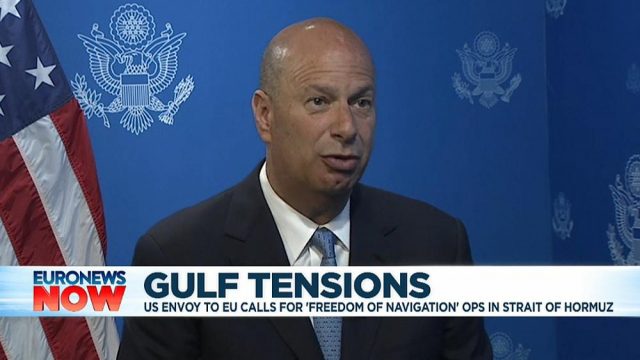 The United States has warned it will bring down any Iranian drones that fly too close to its ships, following a string of incidents on the world’s most vital oil shipping route.

Washington says it has already destroyed an Iranian drone that was allegedly threatening a US navy ship in the Strait of Hormuz.

But Iran has denied the claims: it says all of its drones have safely returned to their base — and even suggested the US military may have brought down one of its own drones by mistake.

The US ambassador to the European Union is now calling on all international partners to work together to ensure free passage in the Strait of Hormuz.

“Almost a quarter of the world’s oil goes through the Strait of Hormuz and it’s unacceptable to the United States and to most of the civilised world for Iran to do anything that would interfere in freedom of navigation through those Straits,” Gordon Sondland told Euronews in an interview.

“We encourage our friends, our allies to join us in freedom of navigation operations to sail freely through the Straits and to keep those waterways open for the benefit of all.”

So far, however, European countries have seemed reluctant to join US operations in the Strait of Hormuz.

Washington has been at odds with its EU partners on how to deal with Iran ever since the United States pulled out of the landmark 2015 Iran nuclear agreement.

“At the moment, what the Europeans are focused on is the Iran nuclear deal,” says Euronews’ Brussels correspondent Jack Parrock.

“The Europeans are trying to keep Iran within the nuclear deal despite the Iranian government announcing that it is breaching the uranium enrichment limits as part of the deal,” he explained on Euronews Now. “The Europeans say that this is reversible, that it’s calibrated and that they can get Iran back in the deal.”

You can watch more of Euronews Now by clicking in the player above.