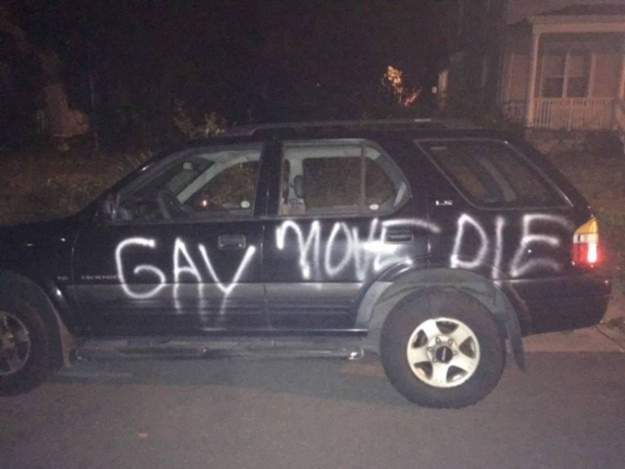 One Virginia man found a nasty trick when he returned to his car on Halloween night.

The man returned to his car after 10 pm on Halloween night in Highland Park within Richmond, Virginia and found it spray-painted with the words “GAY MOVE DIE.”

Finding the spray-painted car scared the man so much that he then had an asthma attack and was taken to the hospital.

“[He] has to drive this car to work in the morning,” added Virginia Pride president James Millner. “This is a big deal. This cannot go unchallenged in this city.”

“This was certainly not done by a random graffiti artist,” Millner told Richmond.com. “This man is known to be gay, and the message on the car says ‘Gay Move Die’—it’s a death threat. That’s not random graffiti trying to be destructive.”

The police are investigating the situation as a hate crime.

“The Richmond Police Department stands with the LGBTQ community in condemning what happened last night,” said Richmond Police Chief Alfred Durham. “I have directed the department’s LGBTQ liaison, Capt. Dan Minton, to monitor the progress of the investigation to keep everyone informed.”

A surveillance video has been shared that shows a single suspect committing the crime, but the suspect has not been identified yet.