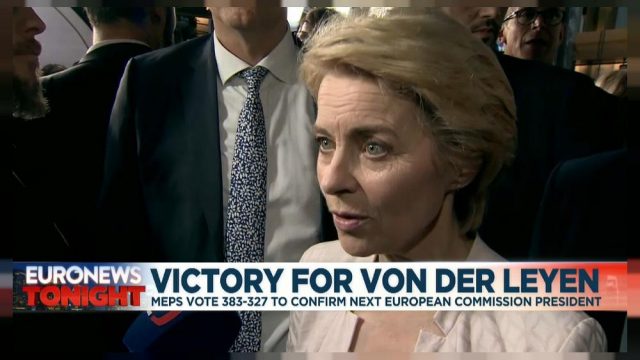 European Commission president-elect Ursula von der Leyen said she was “very relieved” after securing Europe’s top job by the tightest of margins — but denied her slender victory would lead to more political turmoil.

MEPs endorsed her by only 9 votes above the minimum on Tuesday after a controversial and much-criticised nomination process.

But the first woman to hold Europe’s top job told Euronews’ Darren McCaffrey that she was simply pleased to win after having only two weeks to convince MEPs she could replace Jean-Claude Juncker.

“I started 13 days ago without any majority,” von der Leyen said. “Parliament said ‘we want to know you first’. Today I am very relieved and happy that it was possible to convince the majority of the [parliament].”

Germany’s defence minister was chosen as a compromise candidate by EU leaders as part of horse-trading, angering parliamentarians who had put forward their own candidates.

The 60-year-old said she was “overwhelmed” and “happy” at becoming the first woman in the post, but dodged a question about how she would deal with Boris Johnson as a potential British prime minister.

“I have a golden rule for myself,” von der Leyen said. “[To be] very pragmatic, very open, constructive. That’s the way I’m going to deal with all 28 heads of states and governments in the European Union.”

She also denied she had made too many ambitious legislative promises in order to secure support from political factions, such as an EU-wide minimum wage.

“These topics are so important for the EU, for example the goal of being climate neutral in 2050 is crucial for our planet, we are running out of time.”

She added: “This is politics where people want us to deliver in the EU and we should be ambitious.”

Earlier, in a bid to win MEPs’ support, she set out her priorities for the next five years, should she be confirmed in the job.

What did she say in her speech?

On Brexit: She regretted but respected the referendum vote and is open to extending the UK’s departure date beyond October 31.

On the environment: She promised a “green deal” for the EU in her first 100 days in office and said she wanted Europe to be first the carbon-neutral continent by 2050.

On gender equality: She made a point of emphasising she could become the EC’s first female leader and committed to having an equal number of men and women serving her.

Analysis: How well did Von der Leyen do in her pitch for EU top job?

How did MEPs react?

The main message in his speech was that his party would not be supporting her nomination.

“There was no word” on issues like biodiversity or “the favourable treatment given to investors,” says Lamberts. “Where a change of orientation is needed, you propose here and there some bowing, incremental changes and a lot of vagueness.”

Wearing a hoody with names of big companies such as McKinsey, Accenture and PwC, Nico Semsrott, a Green MEP, stood up and requested for “the disclosure of financial interests” and “conflict of interest” to a silent room.

The Confederal Group of the European United Left/Nordic Green Left tweeted its disapproval of von der Leyen with a cartoon that pictures the nominee being pushed towards a door with the EU logo by cartoons of military man, a bank, and big enterprises.

“Unfortunately we won’t be able to support you this evening,” he said.

Leader of the Brexit Party Nigel Farage accused the nominee of pursuing a communist agenda as well as being a fanatic of building a European army.

“I think we can do without you, Mr Farage,” von der Leyen responded.