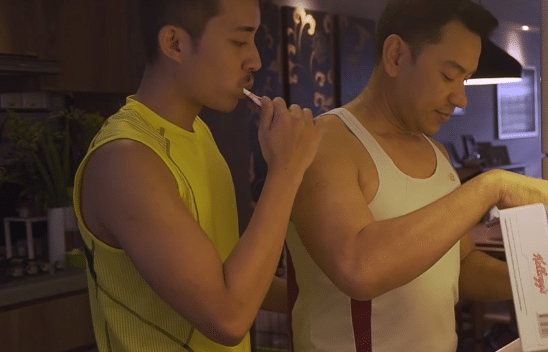 Singapore’s internet went abuzz this week over a video of an openly-gay Malay couple.

The majority of comments are supportive of the couple, but some users have condemned the same-sex relationship.

Faliqh said on Facebook the comments were ‘harsh’. But, he wrote, the many heartfelt comments proved mindsets were changing.

‘Its really great that parents and youths are slowly coming to terms and grasping the topic on sexuality’ he wrote.

‘Hate has no place in this modern era’ he said.

‘If you you are holding that attitude. Bye, Felicia’ he wrote.

Singapore outlaws gay sex under Section 377A of the criminal code. Though authorities rarely enforce it, those found guilty can be sentenced to two years in prison.

A recent survey found the majority of people in Singapore support the anti-gay law.

‘I hope that you guys realise that gay relationships, especially coming from a minority Malay community, is like any other relationship,’ said Faliqh.

The pair have a close relationship with Kaal’s family.

‘One of the factors that kept the relationship going is the love and acceptance from Kaal’s family, they don’t really impose us to be a certain way’ said Faliqh.

‘I feel blessed. I can’t count how many times I’ve felt blessed to be with Kaal’s family’ he said.

Faliqh also said: ‘I guess as a mother, she doesn’t need an explanation from me.’