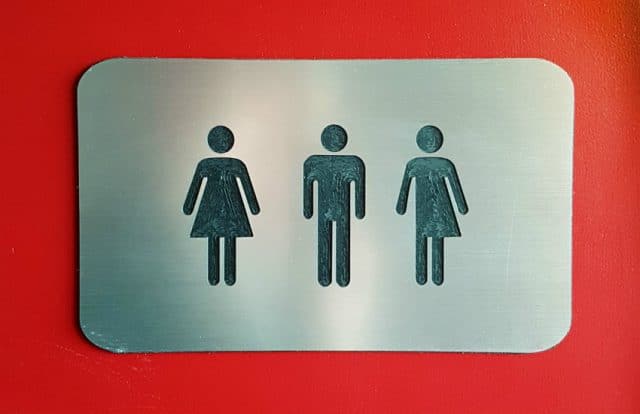 The majority of US voters would support laws allowing trans people to use bathrooms aligned with their gender identity, a new survey has found.

54% of people polled said they would support laws requiring public institutions to protect the bathroom right of trans people.

In addition, 52% of respondents said they would support a US Supreme Court ruling which stated that trans people had a constitutional right to use bathrooms aligned to their gender identity.

The findings from . Researchers say there has been a ‘sea-change’ in the public’s opinion of trans bathroom rights.

However, support for trans inclusivity dropped when those polled were asked about trans participation in sporting events.

The national Harvard CAPS/Harris Poll surveyed 1,295 registered voters between May 29 to May 30.

45% of respondents said that they would support the Supreme Court ruling on the issues of trans bathroom rights.

This is compared to 34% expressing support for Congress deciding on the matter. 20% said individual states should make their own decisions.

‘There has been a sea-change in public opinion on use of public restrooms by transgender people, and a narrow majority would favor a constitutional ruling letting people use the restroom of their gender identity,’ Mark Penn, the co-director of the Harvard CAPS/Harris Poll, .

Respondents remained divided on the issue of which type of bathrooms trans people should use.

Voters were asked whether trans people should use bathrooms aligned with their gender identity or their sex at birth. The response was split 50-50.

Researchers say the findings show greater support for trans rights among the public.  ‘Generally, this is now a 50-50 issue, whereas in the past majorities opposed any use of bathrooms on the basis of gender identity,’ Penn added.

However, this has not translated into support for the inclusivity of trans athletes in sporting events.

The poll found that 45% of people thought it was unfair to allow trans athletes to compete against non-trans athletes. 23% saying it would be fair, and 34% saying they did not know.

Support for trans inclusivity in the military was high. 68% of respondents said they supported trans people serving in the military, compared to 32% opposed.

These findings come less than two months after US President Donald Trump .

The ban has been met with widespread condemnation from trans rights advocates, Democratic politicians, and former military personnel.

Trump justified the ban by falsely stating that the treatment of trans servicepeople placed ‘tremendous costs’ on the military. This claim was widely debunked.

This is in line with the Trump administration’s woeful record on trans rights.

The White House was also met with derision in October 2018 after a leaked memo. The memo suggested that the Department of Health and Human Services was .

Trans rights advocates, multinational businesses and members of the science community took a stand against the move. Many have said that the move would ‘legally erase’ trans people.

The Trump administration has also made several moves to roll back Obama-era legislation protecting the rights of trans students in US schools and .