MIAMI (Reuters) – A lot could have gone wrong for Elizabeth Warren at Wednesday’s Democratic presidential debate.

Warren, a U.S. senator from Massachusetts, arrived in Miami riding a wave of momentum among the race’s more than 20 candidates. By luck of the draw, she was onstage a night before most of the other top-tier Democratic contenders, such as former Vice President Joe Biden and U.S. Senator Bernie Sanders.

As the first night’s top-polling candidate, she did not falter. Her progressive platform — similar to Sanders’— largely went unchallenged by the moderates standing alongside her.

Most important, her status in the race to take on Republican President Donald Trump in the November 2020 election placed her front and center for the Democratic voters watching at home, and she was given ample time at the outset to detail the populist, anti-corporate themes of her candidacy.

“When you’ve got a government, when you’ve got an economy that does great for those with money and isn’t doing great for everyone else, that is corruption, pure and simple,” Warren said in the early moments of the debate, when viewership is typically highest. “We need to call it out. We need to attack it head- on.”

Warren benefited as well from the sheer chaos of the program. With 10 candidates onstage clamoring for attention and each given only a minute to respond, the evening often felt like a 10-car pileup or a round of speed dating.

It was difficult for viewers to track the questions and responses as some candidates often changed the subject. They talked over one another in an effort to reassure the Democratic base that they all mostly shared a common set of progressive values, making it hard for lesser-known contenders to distinguish themselves.

Given the chance to take Warren on, some centrist candidates punted. Early in the debate, U.S. Senator Amy Klobuchar of Minnesota was asked about Warren’s plan to provide tuition-free college at public universities. Instead of criticizing Warren’s plan as being too far-reaching, Klobuchar talked about her own support of community college and Pell grants for college students.

The evening illustrated the difficulty Democrats may face next year if the U.S. economy remains robust. Following Warren’s lead, several candidates framed the issue in terms of the economy failing to serve middle-class, working-class and minority voters.

“I live in a low-income black and brown community,” said U.S. Senator Cory Booker of New Jersey. “I see every single day that this economy is not working for average Americans.”

Despite Warren’s strong performance, there were signs of potential pitfalls ahead. She was one of the few candidates onstage to promote the idea of doing away with private health insurance entirely in favor of Medicare. That earned some skepticism from others such as former Congressman Beto O’Rourke.

Her pledge was quickly highlighted by the Republican National Committee, which promised to use it against her in an effort to alarm voters worried about changes to their coverage.

Beyond Warren, the candidate who likely helped himself the most on Wednesday was Booker, who spoke more than anyone else and gave passionate, engaged answers on immigration and guns. 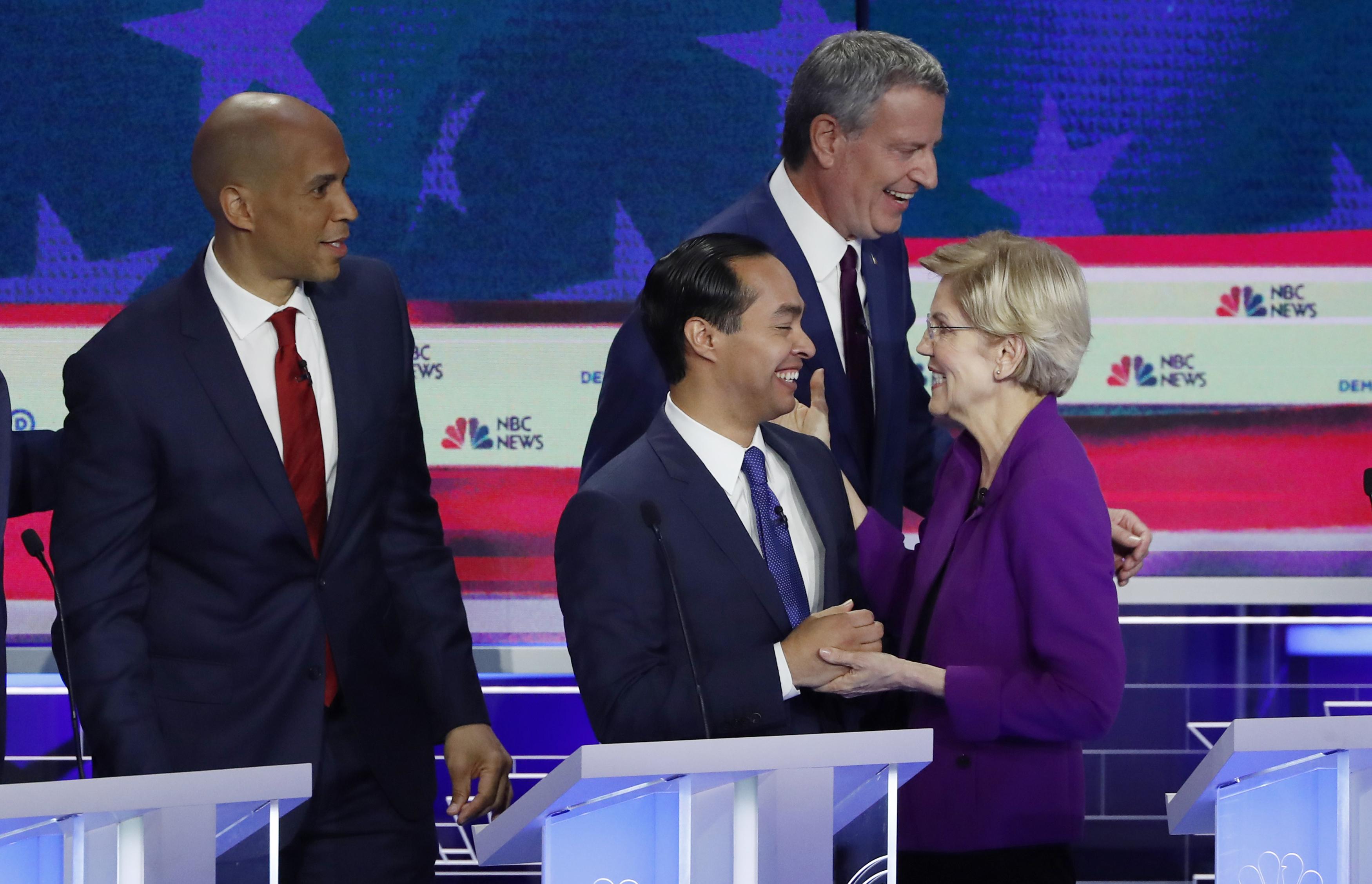 On gun violence, Booker said it was “something that I’m tired of. And I’m tired of hearing people, all they have to offer is thoughts and prayers.”

Former U.S. Housing Secretary Julian Castro also may have raised his stock by getting into a sharp exchange with O’Rourke over decriminalizing border crossings by migrants.

Warren’s moment in the sun likely will be short-lived. On Thursday, Biden and Sanders will take the stage along with other top-tier White House hopefuls, including South Bend, Indiana, Mayor Pete Buttigieg and U.S. Senator Kamala Harris of California.