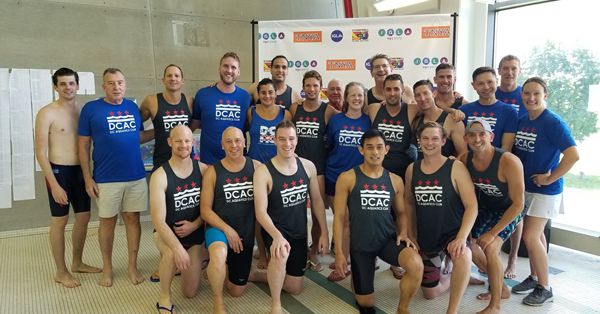 A swimming club from Washington, D.C. cleaned up at the International Gay and Lesbian Aquatics world championship meet in New York City in late June, reported the Washington Blade.

According to Swim Swam, the District of Columbia Aquatics Club joined some 900 aquatic athletes — more than half of them swimmers — competing in Queens, while World Pride celebrations tied to the 50th anniversary of the Stonewall riots were underway in Manhattan.

The masters swimmers of DCAC, formed in 1988 by members of the Washington Wetskins, broke 17 IGLA world records and won 137 medals: 82 gold, 28 silver and 27 bronze.

Posted by District of Columbia Aquatics Club on Monday, July 1, 2019

“On the 50th anniversary of Stonewall, it was important for DCAC and the Washington Wetskins water polo team to compete at this year’s championships,” Jack Markey, a founding member of both teams, told the Blade. “Older athletes who were instrumental in founding and leading LGBT aquatics renewed friendships and athletic rivalries, while looking on with pride at the accomplishments of younger athletes from teams around the world.”

Swim Swam reports in all, 71 new IGLA records were set, at least one in almost every swimming event.

The first IGLA championship was held in San Diego in 1987, and have been held annually ever since.

“IGLA 2019 was a labor of love,” said 2019 IGLA Event Organizer David Hildebrand. “To welcome nearly 1,000 LGBTQ and allied athletes to New York during the 50th anniversary of the Stonewall Uprising was a once in a lifetime experience. This meet was just one of hundreds of events that attracted over four million visitors to the city. We had to make it memorable.”

This was the fourth year swimmers from Uganda competed, and the significance of their participation was not lost on the IGLA or the DCAC.

“Uganda is a place where same-sex relationships are criminalized, social acceptance is low and LGBT individuals face harassment, imprisonment, blackmail and violence,” Markey told The Blade. “While the challenges they face back home are reminiscent of pre-Stonewall America, their presence at IGLA reinforces the importance of LGBT sports programs and the positive effect they have on people’s lives.”

“IGLA is about pride and inclusivity,” added Hildebrand in an interview with Swim Swam. “It’s a meet where record-breakers race alongside novices, where the young interact with the old and lasting friendships are formed.”

The championships ended with the traditional Pink Flamingo deck to pool event, replete with competitors in superhero costumes.