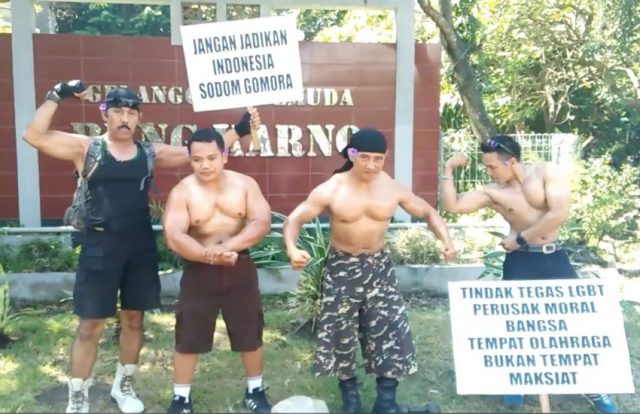 OMG, nobody tell them what #masc4masc means

Four bodybuilders protested against LGBTI people in Indonesia by running down the street topless and then flexing their muscles for media.

Taking to the streets of Solo (also known as Surakarta) a city in the Java province, the bodybuilders were carrying signs and also protesting the presence of gay people at gyms.

This was following the detainment of 141 men who were at a ‘gay party’ at the Atlantis fitness centre last month.

‘What has happened in Jakarta (yesterday) is very damaging to the nation, the young generation,’ Bagyo told the Tribun Solo.

‘Do not make the sport as a place of sinners.’

The oiled up and muscly men carried sign with them as they ran down the streets of solo.

‘Act decisively against LGBT, destroyer of the nations morals,’ one sign read. ‘Gyms are not a place of sin.’

Another sign referred to the Biblical and Quranic tales of a city destroyed because its people were too sinful.

‘Do not let Indonesia become Sodom and Gomorrah,’ the sign read.

The protest comes amid growing hostility against LGBTI people in Indonesia.

Last week, the police chief of the neighbouring West Java province said he had set up a taskforce to monitor LGBTI people. And last month the world was shocked when two men in their twenties were caned 83 times for being gay in Aceh.