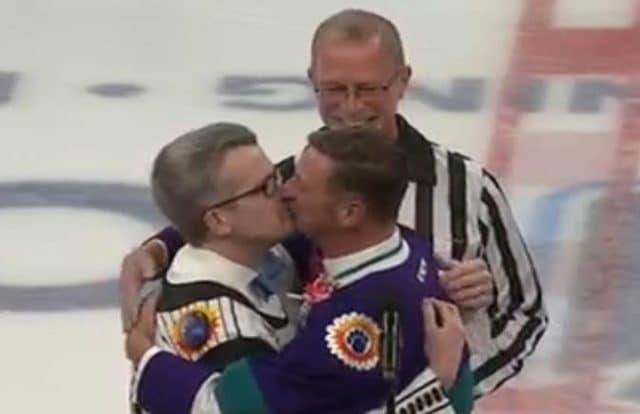 Eric Pinder and Dwayne Smoot took to the ice when it came time to exchange their wedding vows.

The couple were married at the Amway Arena in front of a large group of family and friends before an Orlando Solar Bears game.
They wore hockey jerseys over their suits and priest Gordon Barcalow wore a referee uniform.

Barcalow asked the couple if they ‘promise to love and cherish [each other] through power plays and penalty kills, until the final horn of life sounds.’

The wedding took place back in November but a professional video of the occasion was just completed and gifted to the newlyweds.

‘We met at a party and I was wearing a Red Wings Jersey,’ Pinder tells Outsports.

‘Dwayne knew the team and player so I was impressed. Plus, he is very cute. So hockey was really our first conversation.’

So how did their wedding on ice come together?

‘When we were looking to get married, we thought that doing it before a game would be a great choice — we could get people to go see our local team, the Orlando Solar Bears,’ Pinder said.

‘I called our ticket rep and asked if we could get married before a game. He said, “Hold on,” then three minutes later got back on the phone and said, “Sure, we can do that for you.”‘

Theirs is believed to be the first same-sex wedding to take place at a professional hockey arena.

The Solar bears are part of the ECHL which is a mid-level professional ice hockey league a tier below the American Hockey League. 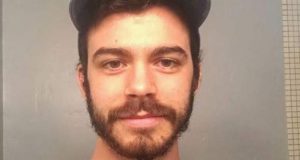 ‘Love, Simon’ Star Joey Pollari Comes Out of the Closet

Nick Gayer
0
One of the most anticipated movies this year is the film Love, Simon, which opens in theaters nationwide on Thursday. The film centers around a...