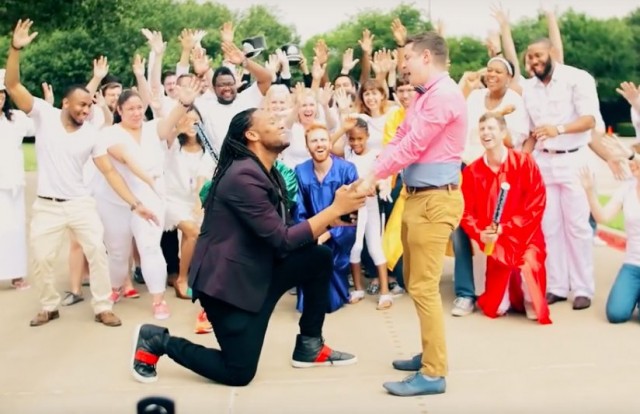 DeAndré Upshaw wanted to propose his boyfriend and make a memorable event out of it. Texas gay couple DeAndré Upshaw and Stuart Hausmann had a blast when Upshaw proposed Stuard in front of 40 people and filmed the moment.

The couple has been together for six years, and their gesture celebrates one year since US Supreme Court legalized same-sex marriage in all 50 states.

‘I’d known from the day we met that I was going to spend the rest of my life with Stu, and we knew we were going to get married, but figured that after six years of being together we’d just announce an engagement,’ says DeAndré conffesed.
‘Never one to miss an opportunity to do the absolute most, I spent four months secretly colluding with family, friends and college roommates across the country to help make this an amazing, special day.

There were also complicated circumstances
‘Texas received record amounts of rain and flooding that weekend (something that wasn’t factored into the equation when I set the date four months earlier), so we had to change venue at the last minute in order to have a backup indoor location just in case we got rained out. It even sprinkled briefly during the shoot, but we persevered!

DeAndre talks about what he loves most in Stu
‘My favorite part is his laugh (Stu has the most unique, adorable laugh) when he sees his friends and family pop out. Some of them he hasn’t seen in years, and some drove in from Austin and Houston.

‘Another thing that made this kind of super special was that I’d lost 119 pounds over the course of the last few months, and this was the first time some of my friends and family had seen me since! It was a great time.”