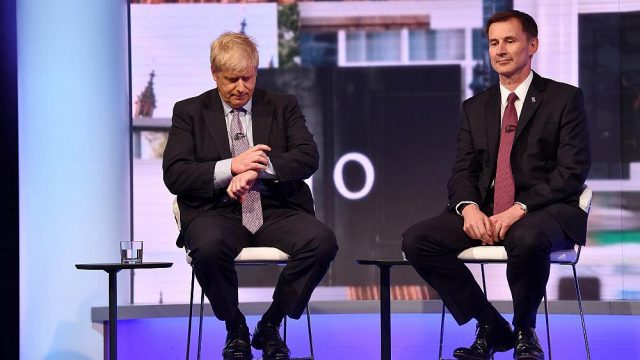 Boris Johnson and Jeremy Hunt, the candidates vying to become prime minister after Theresa May’s resignation, were answering questions from voters on digital platforms on Wednesday.

The former and current foreign secretaries were taking part in an online hustings organised by the Conservative Party.

You can watch along at either of the embedded links below.

Hunt, asked about knife crime, said he believes earlier cuts by his party to police numbers “went too far” and says he will increase numbers if he becomes PM.

Johnson was welcomed with cheers and applause, particularly when he said that he wanted Britain to leave the EU on October 31 wihout exception.

He also admitted that his party was in a “crisis” caused by losing votes to Nigel Farage’s Brexit Party and to the pro-EU Liberal Democrats.

Asked if he would involve Farage in any future Brexit negotiations, he said he was opposed to giving other parties “the oxgyen of publicity.” Pressed on whether he would it out, he said: “I think that’s a pretty clear no.”

He also said he hadn’t promised anyone a cabinet job.