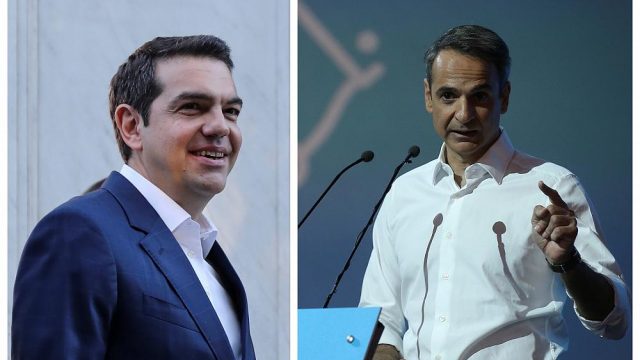 For the sixth time in just a decade and for the first time since the country successfully exited its bailout programme in August 2018, Greeks will head to the polls on Sunday to elect a new government.

The contest, called on May 26 by Tsipras after his party’s disastrous result in the European as well as local and regional elections, has largely been seen as a battle for the middle-class which was severely impacted by austerity measures following the country’s near-bankruptcy and assistance from international creditors.

What do Tsipras, Mitsotakis say?

Tsipras has centred his campaign on his track record steering the country through the three successive bailout programmes. In a last-minute appeal to voters, he argued that “the country’s progress should not be disrupted” after casting his own ballot at a central Athens voting centre on Sunday.

Expressing optimism despite opinion polls showing his formation trailing ND by some 9-12 percentage points, he also said he would remain determined “to the last minute so that all sacrifices and efforts of the Greek people are not wasted.”

Mitsotakis meanwhile has promised tax cuts and focused on economic growth and security. On Sunday, after casting his vote in the northern Athens district of Peristeri, he said that “today, Greeks are taking their country’s fate into their own hands.”

READ MORE: Greek elections: Which parties are in the race?

Euronews will be tracking the results as they come in and keeping you up-to-date with all the latest in the live blog below.