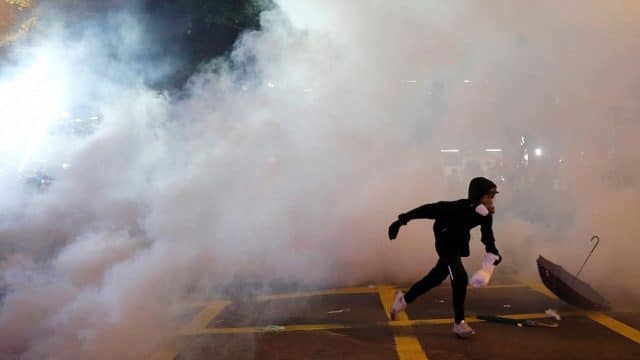 Protesters have been demonstrating for several weeks over an extradition bill.

They are demanding the full withdrawal of a bill to allow people to be extradited to mainland China for trial, where the courts are controlled by the Communist Party, fearing it would undermine Hong Kong’s judicial independence.

They are also demanding independent inquiries into the use of police force against protesters.

On Sunday night, men in white t-shirts, some armed with poles, stormed a train and attacked passengers, according to footage taken by commuters and Democratic Party lawmaker Lam Cheuk-ting.

Eye-witnesses said they appeared to target black-shirted passengers who had been at an anti-government march and the attack came after several thousand activists surrounded China’s representative office in the city, later clashing with police.