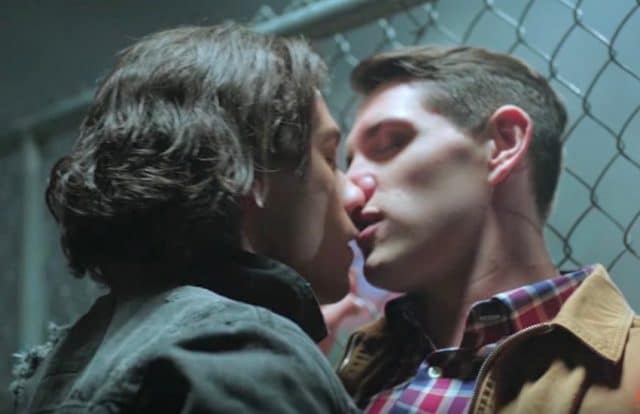 Riverdale is off to a sexy start on The CW and gay teen Kevin Keller is in the thick of the action.

Joaquin is a member of the local gang the Southside Serpents and his group is being disruptive during the movie.

Kevin tries to quiet them and is confronted by Joaquin at the snack bar.

Kevin is ready to binge on junk food because he sees his recent hook-up – hottie football player Moose (Cody Kearsley) – making out with a girl.

Next thing we know, Kevin is binging on Joaquin. These two make-out furiously against a chain-linked fence and it is all kinds of hot.

Joaquin has Kevin’s phone number now so looks like we haven’t seen the last of this bad boy.

Kevin is first openly gay character in the history of the Archie Comics franchise.

He was introduced in 2012 to the longtime franchise which takes place in the fictional town of Riverdale and includes such familiar characters as Reggie, Veronica, Jughead, Betty and, of course, Archie.

The new TV series takes a subversive look at the familiar characters and the darker side of what is going on beneath the wholesome Riverdale image. 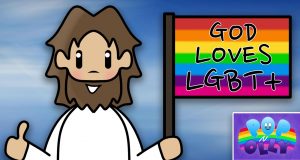 Nick Gayer
1
While faith communities are slowly becoming more welcoming of LGBTQ people — in general and within their congregations — many religious groups are still... 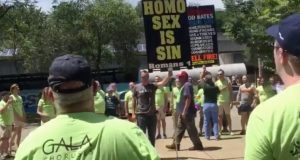 Gay Men’s Chorus Sing “We Shall Overcome” To Drown Out Hateful...

Nick Gayer
0
Give it up for your weekend heroes: the Gay Men’s Chorus of Washington D.C. Performing at Knoxville Pride in Tennessee this weekend as part of... 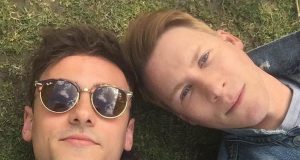