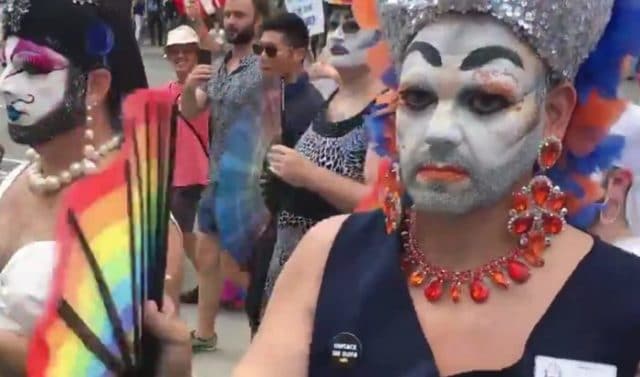 The Sisters of Perpetual Indulgence helped out an anti-hate speech protest by drowning out a hate group commentator.

The counter-protest, All Out D.C., was larger than the protest itself and featured immigrants, Native Americans, and trans women of color as speakers and local artists as performers.

And the Sisters of Perpetual Indulgence were there.

In a video that was posted to Twitter, the Sisters drowned out a member of the far-right media that was antagonizing the counter-protestors… with fan thworps.

Because it’s really, really hard to hear what others are saying when a bunch of nuns are thworping their fans.

Clarification: DC Chapter of Sisters of Perpetual Indulgence use hand fans to drown out a far-right media host who had been antagonizing #AllOutDC protest crowd pic.twitter.com/RFrhfdZsak

The Proud Boys is a white supremacist group that encourages its members to engage in violence, and it is classified as the hate group by the Southern Poverty Law Center. Even the FBI says they are an “extremist group with ties to white nationalism.”

Last year video circulated social media of the Proud Boys beating up a leftist activist while calling him a “faggot,” something that the group’s founder, Gavin McInnes, defended because “there is truth in the word faggot.”

The speakers at Saturday’s rally whined about how social media isn’t letting them spread their hateful message enough.

“I may have been the first person in history completely banned from Tinder,” said speaker Greg Aselbekian.

McInnes appeared at the Demand Free Speech rally in handcuffs, which were meant to symbolize censorship on social media. But he couldn’t get them off during his speech and had to be helped by a stage hand.

He later claimed that that was his plan all along.

During his speech, he said that the Proud Boys were like German soldiers fighting Soviet troops during World War II, effectively calling the group he founded Nazis.

“That’s how it feels to fight antifa,” he said.

“The people holding the free speech rally were kicked off social media for bigotry,” counter-protestor Laura Crain told Al Jazeera. “They are weaponizing the concept of free speech and we oppose the hateful, bigoted rhetoric they espouse.”