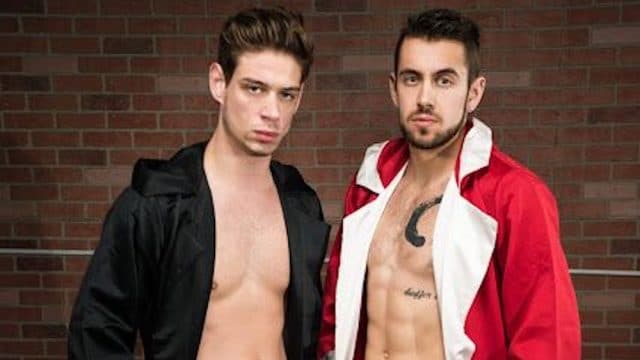 Michael DelRay and Dante Colle, two well-know gay adult video performers, recently encountered a few antigay protestors on the Santa Monica Pier in California. The protestors yelled into a megaphone, held signs reading, “Where will you spend eternity? The fool has said, ‘There is no God.’ Repent or Perish,” and one of them wore a “Trust Jesus” t-shirt.

But instead of repenting or perishing, DelRay and Colle decided to start kissing in front of the protestors, going so far as to rip off their shirts, hop on one another and basically humping in the middle of the boardwalk. One protestor looked away, but the one on the megaphone just got louder and louder, presumably to distract from the two guys getting to first base together.

In a tweet, Colle wrote, “I asked these Anti Gay preachers how to be forgiven for our sins. ‘Theres no helping you guys,’ he says…
Well. Might as well enjoy it then…”

Colle and DelRay are friends who post pics together and comment on each others’ Twitter pages. The two men had previously performed in a scene together for the studio Icon Male.

Here’s video of DelRay and Colle making out in front of an antigay protestor.

If Colle’s name sounds familiar, it could be because he recently appeared on VICE’s new docu series Slutever, discussing the stigma that bisexual adult film performers face. He said:

Colle was also one of the adult stars recently subjected to FaceApp’s aging filter, showing how he’ll look when he’s a sexy grandpa.