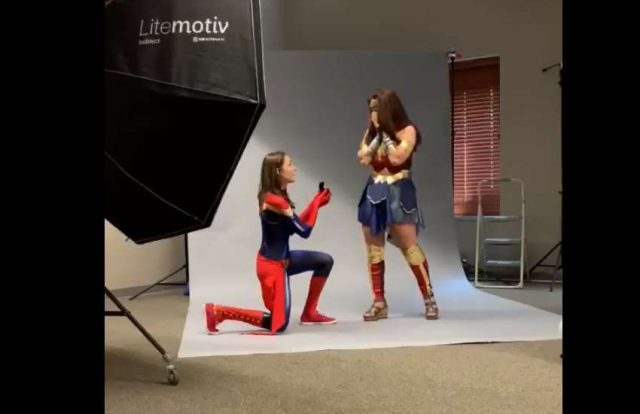 Over the weekend, couple Ashley Vansickle and Deanna Mascia attended Motor City Comic Con, their first comic convention. Little did Mascia know it would be a memorable weekend for reasons more than simply being her first con.

Vansickle, 26, and Mascia, 25, dressed up as Captain Marvel and Wonder Woman, respectively, at the fan gathering in Novi, Michigan.

They had been dating for a little over a year when the convention came around, and Vansickle knew Mascia was the person she wanted to spend her life with — so she hatched a plan.

Onysko is currently on a mission to visit comic conventions in every state, offering free photography sessions for cosplayers. The end result will be a photography book titled Cosplay 50: The United States of Cosplay.

Vansickle told the how the proposal went down.

While posing for photos, Vansickle suddenly said: ‘I don’t think we should be fighting. We should be uniting.’

That’s when she got down on one knee, proposed, and received an enthusiastic ‘yes’ from Mascia. Watch the sweet and tear-jerker moment below.

‘Our whole relationship and our lives are based around comic books and superheroes,’ Vansickle told the Detroit Free Press following the proposal.

Mascia said Vansickle was ‘the first girl, the first anybody’ she ever shared her love of comics with, which stemmed from bonding over Superman and comic books with her father.

‘She gave me the courage to be myself,’ Mascia added of Vansickle.

For Onysko, Motor City marked her 17th stop on her convention adventure — and one of the more memorable ones.

‘It was very meaningful,’ she said of the proposal. ‘I’ve had a lot of great comic con moments and this one is definitely at the top.’