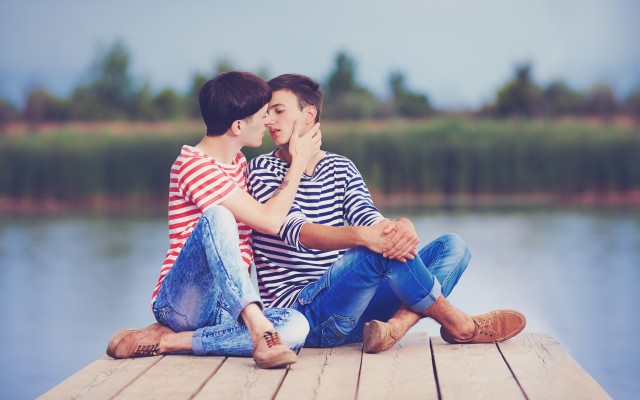 It is surprising how our entire lives can amount to little and then 1 or 2 things come into it that mean more than all our years combined.

They come like storms and lift us up and away from our mundane belongings and into a whirlwind of beautiful surprises. And in the end, when the storm finally settles, we embrace the outcome, happy about the fact that our lives will never be the same.

This is exactly what happened with Brian and Sasha, 2 ambitious young lovers who came together against all odds. Both had no idea what fate truly had in store for them. Not in their wildest dreams could they have imagined that one day, they would be together.

Brian was a barista at a local café and Sasha, a music student who used to frequent the coffee shop with friends on the weekends. Brian, being from the PNW, a region known and appreciated for its tolerance of same-sex relationships; was already very much in touch with his identity.

He was 25 and had dated quite a few men since high school. He did however; suffer from a lack of initial confidence, enough to not strike up a conversation even if he really liked a person.

Sasha on the other hand, was the polar opposite. He was friendly, engaging and a perpetually cheerful person. So much so that he caught the eye of almost everyone who was near him, including Brian, on one rainy Saturday morning.

Several weeks passed and summer finally arrived. The café began to see fewer customers each day but much to Brian’s delight, Sasha continued to visit. Each day, Brian would try to attract his crush’s attention and each day, his attempts would go unnoticed, until that fateful Monday when Brian decided to take his efforts a step further. As Sasha came in, and got in line to order his beverage, Brian looked over and gave a faint smile. Instantly, Sasha smiled back, eyes twinkling as if he had been waiting for an opportunity all this time. And he had been, unknown to Brian.

From the very first day since Sasha started visiting the café, he had had a crush on Brian. But due to almost always being in a social setting, with at least 2 friends accompanying him, he had hitherto been unable to act upon it.

But that day, he was alone. As soon as Sasha approached to order his usual latté, Brian gave the biggest of smiles and discreetly slipped him his number. And this was the start of a long and fruitful relationship; a bright but shy smile and a piece of paper that made sure the 2 young lovers were inseparable in the years to come.

They started meeting outside the café which transitioned into frequent dating and eventually, moving in together. And after one year of living together, the young couple eventually tied the knot in a small ceremony, proving to the world that love truly does win in the end.