Home Gay Life ‘We are not afraid’: What have Europe’s front pages got to say... 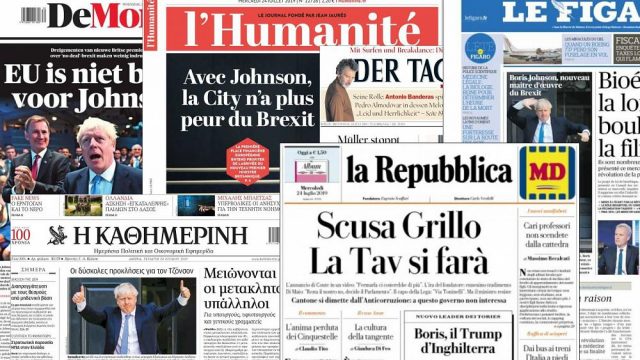 The 55-year-old former journalist is facing a challenging period as soon as he steps into the role with the looming Brexit deadline approaching at the end of October.

So how has Europe’s media reacted to the new appointment?

“The EU is not afraid of Johnson.”

“Boris Johnson has 100 days to prepare for Brexit.”

“With Johnson, the City is no longer afraid of Brexit.”

“The difficult challenges for Johnson.”

“Boris, the Trump of England.”

“Myself and my friend Boris play the fools, but we’re not fools.”

“Prime minister, who is afraid of Britain.”

“Boris Johnson: The prime minister who wants to resolve Brexit.”

“Boris Johnson assumes power with ideas of the hardest Brexit.”

“Boris Johnson puts the brake on not breaking the Conservative Party.”