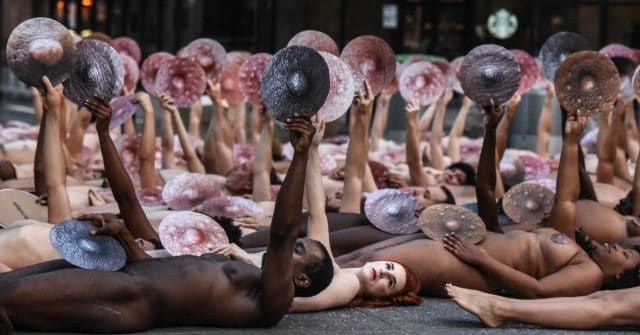 Nude protesters gathered outside the Instagram and Facebook headquarters in New York on Sunday (June 2) to demonstrate against the censorship of artistic nudity.

125 people lay down naked outside the social media headquarters, whose policies allow nudity in sculpture and painting but not in photography. They covered their genitals with photographs of male nipples to highlight the gender inequality in existing nudity policies.

The demonstration called #WeTheNipple was organised and photographed by artist Spencer Tunick in collaboration with the National Coalition Against Censorship (NCAC).

According to the campaign’s page on the NCAC website, the nudity ban “particularly harms artists whose work focuses on their own bodies, including queer and gender non-conforming artists, and the bodies of those in their communities.”

Tunick, who is known for organising mass nude photoshoots, said: “The work I’m allowed to post is fundamentally different from the work I make. To me, every pixelated nipple only succeeds in sexualising the censored work.

“As a 21st century artist, I rely on Instagram. It’s the world’s magazine and to be censored on it breaks my spirit.”

The photographs of nipples were “donated” by artists and actors including Bravo’s Andy Cohen and Red Hot Chili Peppers drummer Chad Smith.

NCAC have written an open letter to Facebook about the campaign which has over 250 signatories including artists, museums and arts organisations.

Director of Programs at NCAC, Svetlana Mintcheva, said: “If Facebook and Instagram want to be platforms for artists, they need to modify their current over-broad ban on photographic nudity, which harms artists who work with the human body, especially those exploring issues of gender and identity.”

Currently, Instagram has hidden all of the search results for the hashtag #WeTheNipple.