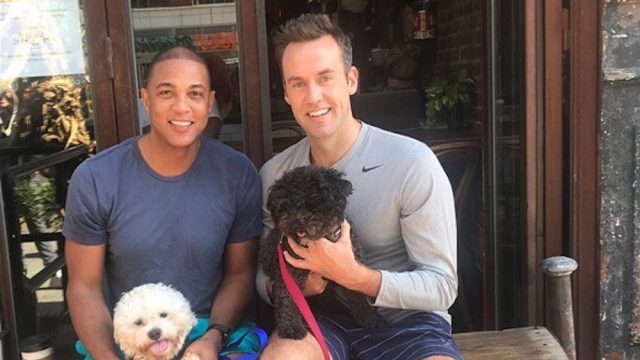 Lemon revealed his engagement on Instagram. The marriage proposal itself was engraved on bowtie-shaped dog tags that were placed onto the collars of their puppies, Boomer and Barkley. The engraving read, “Daddy will you marry papa?”

Last year, Lemon told Metrosource that the couple met at a Hamptons-area restaurant after Malone had broken up with someone. Lemon and Malone had already been friends for over a year before they began dating. The two shared an on-air kiss during CNN’s live New Year’s Eve broadcast last year.

It’s unclear when exactly the two will wed.

He gave me a present on his birthday. How could I say no?

During their ceremony, Jacobs and Defrancesco wore “Art Deco diamond and onyx Penguin pins.” Jacobs wrote on Instagram, “Penguins have only one partner and mate for life. A great example of faithfulness and fidelity.”

As a thank you gift, wedding guests received a sweatshirt embroidered with the image of two otters holding hands and the words, “Don’t Float Away,” a reference to the fact that otters hold hands when sleeping in streams to help anchor each other so they aren’t carried away by the current.

Jacobs proposed to Defrancesco last April in a Manhattan Chipotle. After a flash mob danced to Prince’s song “Kiss,” Jacobs got down on one knee and proposed —Defrancesco accepted. Jacobs is a 55-year-old fashion designer and Defrancesco is a candlemaker and former model.