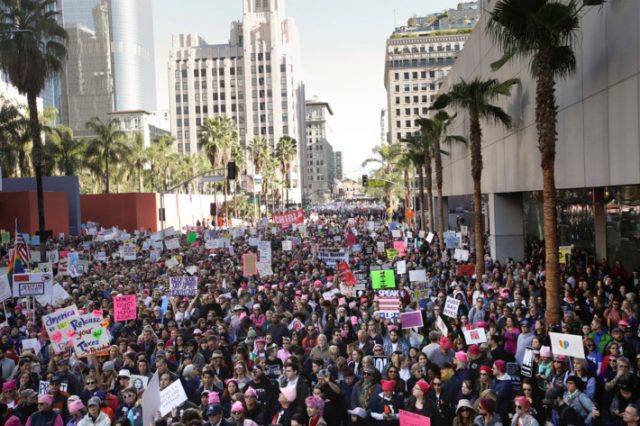 Crowds gather for the Women’s Mach in downtown Los Angeles.

California is losing its chill — another major protest against Trump is on its way. The demonstration is being planned to coincide with Los Angeles Pride and the National Pride March in Washington D.C., so mark your calendar for June 11 and prepare to get loud. (But by all means stay loud until then, also.)

At the rate things are going, Donald Trump’s presidency will go down as the dawn of a new era of resistance. On January 21, three times as many protesters showed up for the Women’s March in Washington compared to Trump’s inauguration the day before. Add in the numerous “sister marches” across the country and the world, and the number of Women’s March participants rises to the millions. In downtown Los Angeles alone, organizers estimated that 750,000 people took to the streets.

A major message of the day’s events was resilience.

When political activist, author and scholar Angela Davis took the stage to address the D.C. crowd, she said with unwavering determination:

These were not idle words.

Last week we reported that activists on the East Coast, inspired by the Women’s March, are planning a “mass” LGBT demonstration in Washington D.C. to fall on Pride weekend. It was only a matter of time for the idea to fan out.

“I was seeing all the excitement around what was going on in Washington D.C. regarding their Gay Pride efforts,” activist and L.A. Police and Fire pension commissioner, and one of the California event’s organizers, Brian Pendleton told Queerty. “And coming off of what the Women’s March did around the country, it seemed like a natural fit.”

Pendleton created a Facebook page proposing that this year’s L.A. Pride parade be turned into a political march. “Floats and marching bands are nice when we are not at war. Now is the time we shake things up and take to the streets,” he wrote. In 24 hours, the event received over 20K positive responses in the form of RSVPs or people marking “interested.”

Support was echoed in many of the comments. “I’ve never attended a protest, but I will be attending this one,” wrote Bree Orozco. Sung Tse said “It’s my kid’s 18th bday! What an amazing way to celebrate!”

“We hope hundreds of thousands of people show up, with this idea of resisting,” Pendleton told Queerty. “We want to resist apathy. We want to resist having our rights rolled back by an unenlightened administration. And we want to be all-inclusive. We want to make sure that it’s everyone in the rainbow spectrum out there being represented.”

Pendleton and his fellow activists are in talks with Christopher Street West, the organizer of LA.’s annual Pride, as well as the City of West Hollywood, to get the one-time format change from parade to protest. And while he suggested to us that not everyone was immediately on board with the plan, “the good news is everyone’s at the table, and we’re all working together.”

The White House has been especially dodgy on whether Trump will sign an executive order allowing anti-LGBTQ discrimination in the guise of so-called “religious freedom,” with some sources saying to expect it soon.

We will be following the progress of the L.A. march as it develops and bring you updates.