Home Gay Stars What happened when an Ohio high school found out its all-state football... 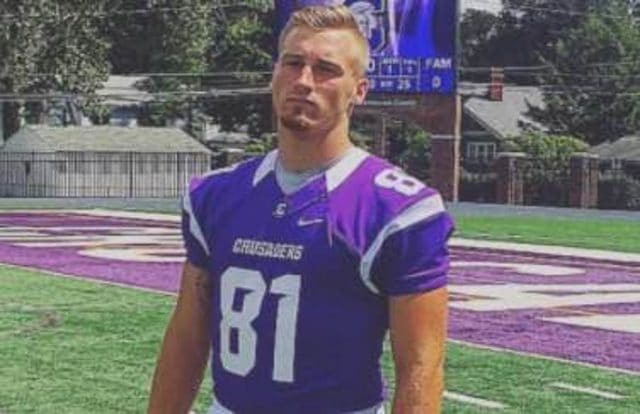 At North Union High School in Ohio in Richwood, Ohio, the most terrifying thought in football star Wyatt Pertuset’s head was that anybody would find out he was gay.

‘I was always terrified with the locker room talk that went on about gays and how gross they are and how wrong being gay is. Yes, that talk was there. It just pushed me further into the back of the closet,’ he writes in an essay published in Outsports this week.

After his junior season was over, Pertuset decided to come out to a handful of trusted friends.

One of them it turned out could not be trusted and the news was soon all the small school that one of the captains of the football team was gay.

‘The next day I came out and confirmed the rumors,’ he writes.

‘After telling my friends and coaches and family, everyone was so accepting and loving that I just felt foolish for ever hiding who I am.

His teammates took it really well and ‘didn’t treat me the slightest bit differently. If anything, I got more respect because of it.’

That set Pertuset up for an entire senior year as an openly gay student and he decided to make the most of it.

He was elected student body president as well as homecoming king and prom king and made honor roll.

‘I set a goal to be one of the first openly gay athletes to get an All-State Honor for football in the state of Ohio,’ he writes.

And he did just that. The young athlete was named to the first team All-Conference, First Team All-District and Special Mention All-Ohio.

The charmed life has continued since graduation a year ago.
Pertuset has completed his freshman season playing for Capital University in Columbus, Ohio.

He became the starting punter two games into the season achieved a career high 54 yard punt. And his sexual orientation has not been an issue for his teammates and coaches.

‘My goal for next season is to be one of the first openly gay football players in the NCAA to score a touchdown and receive an All-Conference honor,’ he writes.

‘If you are in the closet and also an athlete and you’re reading this, I want you to know that coming out is not as scary as you make it out to be. It is the most relieving experience you’ll ever come to term with.

‘You finally get to be yourself and show people that the LGBT community knows how to play ball too.’