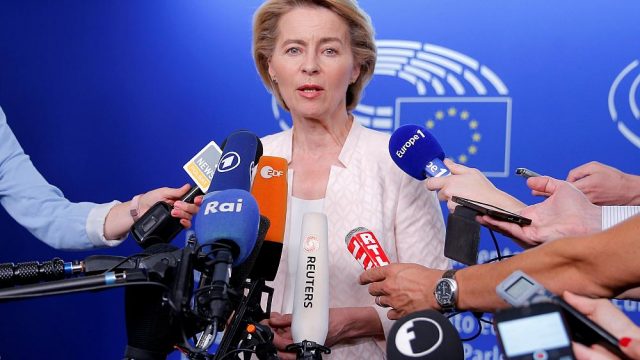 If MEPs reject her candidacy, the European Council has 30 days to propose a new nominee.

But with time running out to solve urgent issues, including Brexit, European leaders will be keen to move quickly to avoid political logjam.

An emergency EU summit would likely be convened within days to find a replacement for the Von der Leyen.

The CDU politician has already announced that she will step down as Germany’s defence minister, regardless of the outcome of the vote.

The pledge was part of a series of promises made to various groups in order to gain support, but she has had barely two weeks to make her case since EU leaders declared her the nominee after a tense three-day summit.

Her rejection could force EU leaders to return to the Spitzenkandidat system in which a nominee is chosen from one of the leaders of the parliamentary groupings, rather than another behind-closed-doors deal.

However, the previously suggested Spitzenkandidat nominee, EPP leader Manfred Weber, proved unpopular while Dutch socialist Frans Timmermans, the socialist grouping leader, was unpalatable to eastern EU states such as Hungary and Poland, due to his role in the bloc’s rule of law probes against their nationalist governments.

Weber last month said he had been “very disappointed” in the way Von der Leyen was chosen.

“There were backroom talks and late-night sessions in which the Macron and Orbán axis prevailed and the Spitzenkandidat system was dismantled,” he said.

Von der Leyen needs 374 votes to be elected president of the European Commission, but anything less than 400 would be seen as disappointing. Jean-Claude Juncker received 422 votes in what was then seen as a narrow confirmation.

Whoever becomes the new head of the European Commission is due to take power on November 1, immediately after the latest deadline for Brexit.

They will have to manage the Brexit aftermath, Italy shirking its debt targets and efforts by Poland and Hungary to flout the EU-mandated rules of liberal democracy.

For that, the commission president will need a reliable majority in Strasbourg, but the recent round elections returned a more fragmented EU parliament than ever.