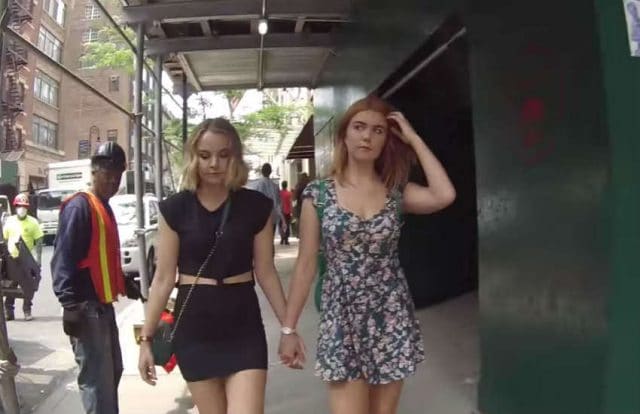 We were standing awkwardly at the corner of the street waiting for the lights to go green when she leaned over to kiss me. It was quick, just a peck kiss, which I didn’t really understand as we were kissing hard in a pretty crowded movie theatre just ten minutes before that.

As I had only been with guys until that moment, I never had to think twice about ‘public displays of affection (PDA). Being afraid of kissing or even just holding hands with someone never crossed my mind. Therefore, I didn’t read much in her very wary attitude.

But that perfect albeit cautious moment was just a few seconds away from being ruined forever.

I noticed she was looking over my shoulder in shock. I didn’t realize it at first, as I was giving my back to whatever it was that turned her pretty face into a disgusted grimace.

And then I turned around to lay my grossed out eyes on a guy in his car.

He had stopped at the lights and he was wanking, aggressively making eye contact.

I can’t remember exactly what we did. Years after, I just clearly recall I had never seen her freeze like that.

I must have engaged somehow, perhaps giving him the finger, because he leaned over to shout something at us.

He rolled down his window and yelled, ‘That’s what you should like’ without taking his hand off his dick. That’s some serious multitasking there, my friend. 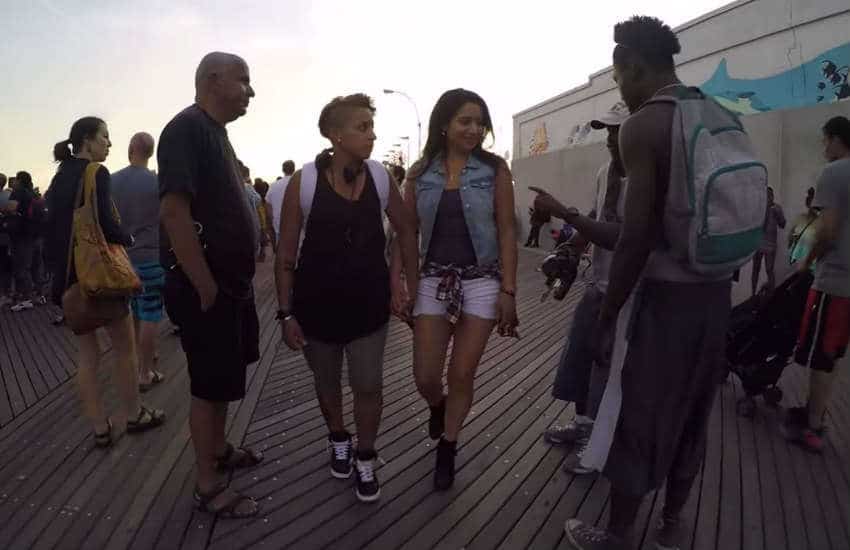 That wasn’t the first time a complete stranger masturbated in front of me, because of me.

However, it was the first time a presumably straight man did so because of my sexuality, because of the person I was with, a woman. And it only added an annoying heteronormative layer to that already pretty horrible incident.

Sure, this is an abusive behaviour not only women have to deal with. Certain straight women fetishize gay and bisexual men in LGBTI clubs with inappropriate touching often being a consequence.

Nonetheless, there is an eerily systemic element in the way straight men interact with queer women which makes it worse. I like to call it correctional catcalling, but it’s really just street sexual harassment aimed to silence our queer identities.

Lesbian and bisexual women and enbies are constantly fetishized by the male gaze. It feels like their same-sex love isn’t valid unless there’s a straight man watching, assuming that must be a show put up for his own enjoyment. An invitation.

When men realize this is never the case, that’s when the abuse comes in. When women and enbies don’t walk the straight line, some heterosexual men feel they should or can change them by invading their personal space, catcalling them, hurling abuses or flashing their penises.

As if the sight of a dick could suddenly remind women of what they’re missing out. We’re surrounded by phallic iconography, chances are even gold star lesbians know what a penis looks like.

‘Hey! This is what you should like. A penis. Specifically, my penis.’ That’s what that pathetic wanking really meant. 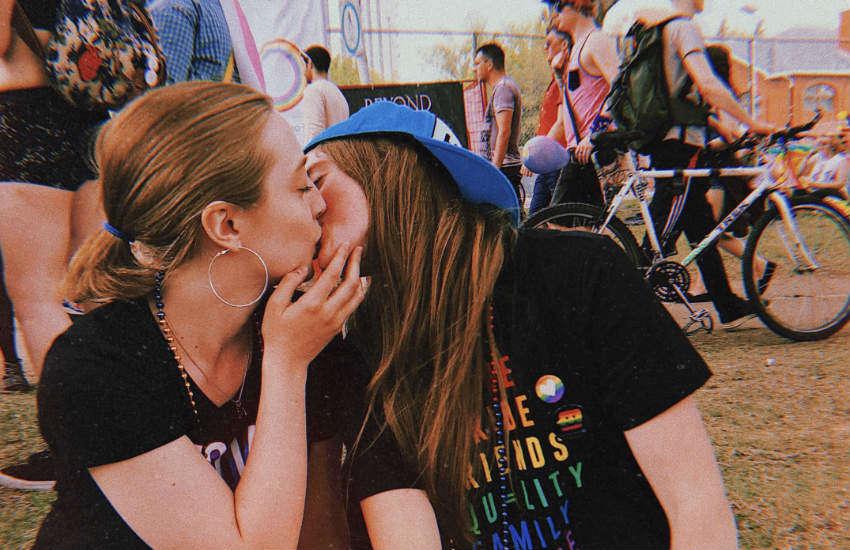 ‘I was walking through the centre of Harrow [northwest London, England] and holding hands with my girlfriend, and a man literally crossed the street to confront us and shout at us, in our faces “you’re not lesbians… you just need a dick in you,”‘ Eve Hartley says.

‘He then continued to follow us down the road until for the next ten minutes, hurling abuse like “nasty dykes.”‘

That wasn’t the only instance in which Eve, 24, felt unsafe while out with a girl.

‘Another time, I was on a first date with a girl and we went for some drinks in a bar and had a really nice time, so we walked back to Piccadilly Circus tube station to say goodbye and go our separate ways,’ she also says.

She furthermore adds: ‘We went into the station and downstairs just before it splintered off into the different directions and we kissed goodbye. At the very moment, we kissed a group of rugby lads, around 20 of them, surrounded us, leaving us in the middle of them with no way to get out, and they started chanting “lesbians, lesbians, lesbians”. They started asking us for threesomes and this went on until we managed to push our way out of them and literally run towards our different tubes.’ 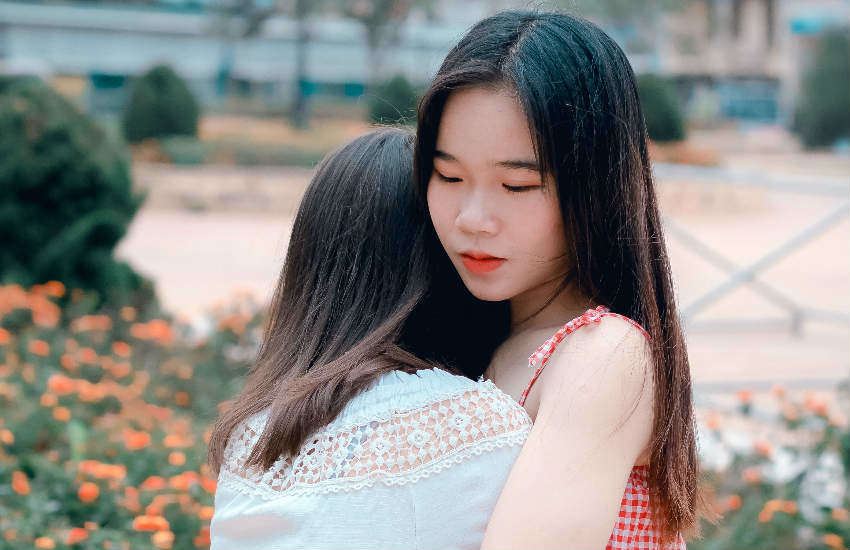 ‘I was on a date once a few years ago in a pub garden and some middle-aged man came over and said something about being “the beef in your sandwich”. We asked him to leave several times but he didn’t until the girl I was with slapped him,’ Stef Extence, 23, recalls an incident happened when she was 20.

‘I identify as a lesbian and I present as butch. At the time I was only recently out and new to navigating the world as a lesbian. I’d never been on a public date with another woman before, and I was terrified, to be honest. I always thought if it happened to me I would stand up for myself and say something but I just froze, and all I could manage to say was asking him to leave.’

She also says: ‘I’m an optimist and try to be positive about most things so I refuse to hide my relationship in public and I’ll always hold my girlfriend’s hand, but it’s tiring looking out for glances from men and wondering what they’re thinking or if they’ll say or do something.’ 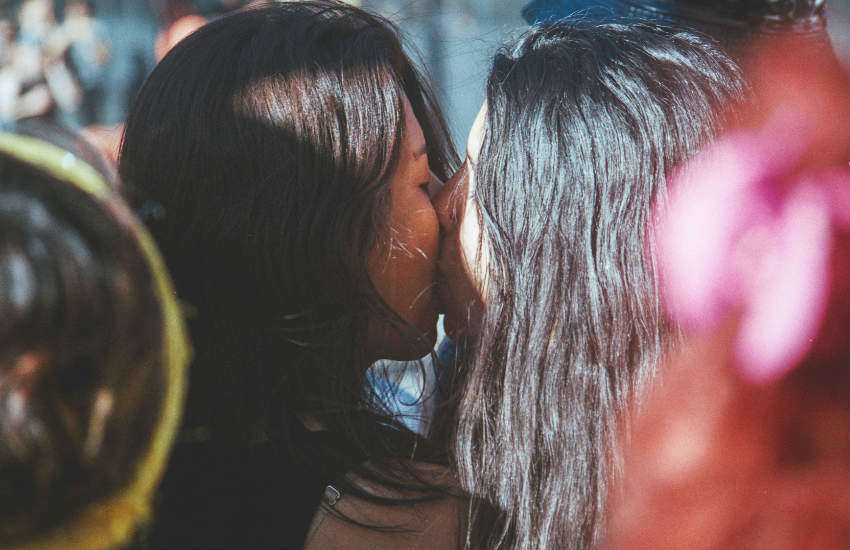 ‘At the time we were 21 and 19. We went to a sports match followed by a marquee with a bar, live band, and dancefloor put on by my dad’s company,’ Pip Williams says.

Pip is 24 and they identify as non-binary but are often read as a cis woman. They are in a relationship with Ronan, who wasn’t out as a trans man at the time of the incident.

‘We were a few drinks in and we were dancing together. It was one of the first times we’d been out as a couple since I’d come out to my family and we shared an extremely chaste kiss on this dancefloor,’ they recall.

‘A man who must have been in his thirties or forties came up to us. I can still remember his exact words: “Is this a one-on-one thing, or can anyone get involved?”‘

They add: ‘ I actually felt sick and stunned. My partner, who is usually the shy one, told him where to go, but we left pretty quickly afterwards. I felt so dirty and sexualised and embarrassed! The worst parts were the age thing, he was nearly twice our age. And the fact that this man worked for the same organization as my dad. The fact of us being there meant we had to be connected to the organization in some way, yet he still felt emboldened to creep on us.’

‘We’re not a very PDA couple and for me at least, that played a factor for several years. We wouldn’t hold hands walking past groups of men in public. Even now my partner has transitioned and we are much more obviously a different gender couple, it’s hard to shake that feeling that our relationship is being voyeuristically consumed without our consent.’ 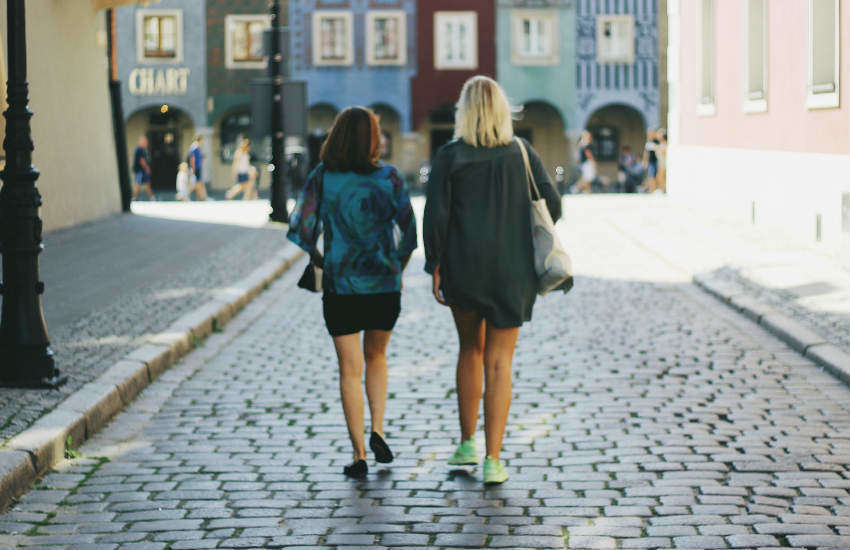 The implications of correctional catcalling and abuse are incredibly sad.

Do queer women exist to be sexual objects to fulfil straight men’s heteronormative fantasies? Would men dare act like that if women were with a boyfriend rather than a girlfriend? They might, but as disheartening as it sounds, it’s way less likely.

Such episodes where misogyny meets homophobia are often the norm for many queer women and non-binary femme people.

Catcalling and abuse with a disciplinary intent are a not-so-subtle form of violence to shed a light on this IDAHOBIT.

Judging by the shocked, defensive attitude some straight men adopt when confronted with the reality of correctional catcalling and street harassment, this is an uncomfortable yet much-needed conversation.

Being a lesbian in a man’s world is lonely: Find your own tribe to survive