Home Gay Life What it’s really like to run a clothing-optional gay resort in Palm... 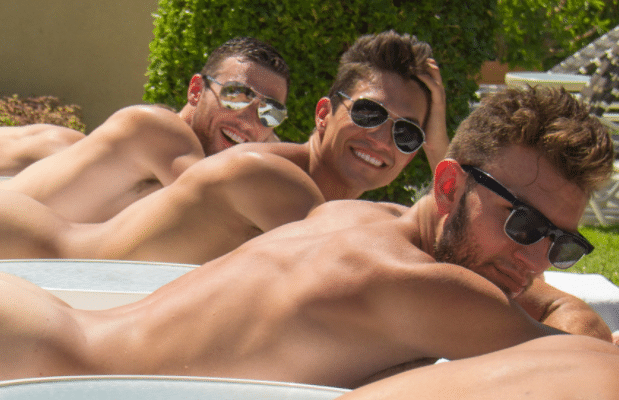 Jon Jackson and his husband Sandy Miller thought twice before buying Palm Springs’ gay, clothing-optional resort INNdulge in 2010. But little did they know what an amazing experience running the 31-room hotel would be.

Think midnight pool parties, making new friends from around the world, and spending their days in one of the US’s most amazing cities. Palm Springs is of course known for its huge LGBTI population, super cool art deco stylings and 300 days of sunshine a year. 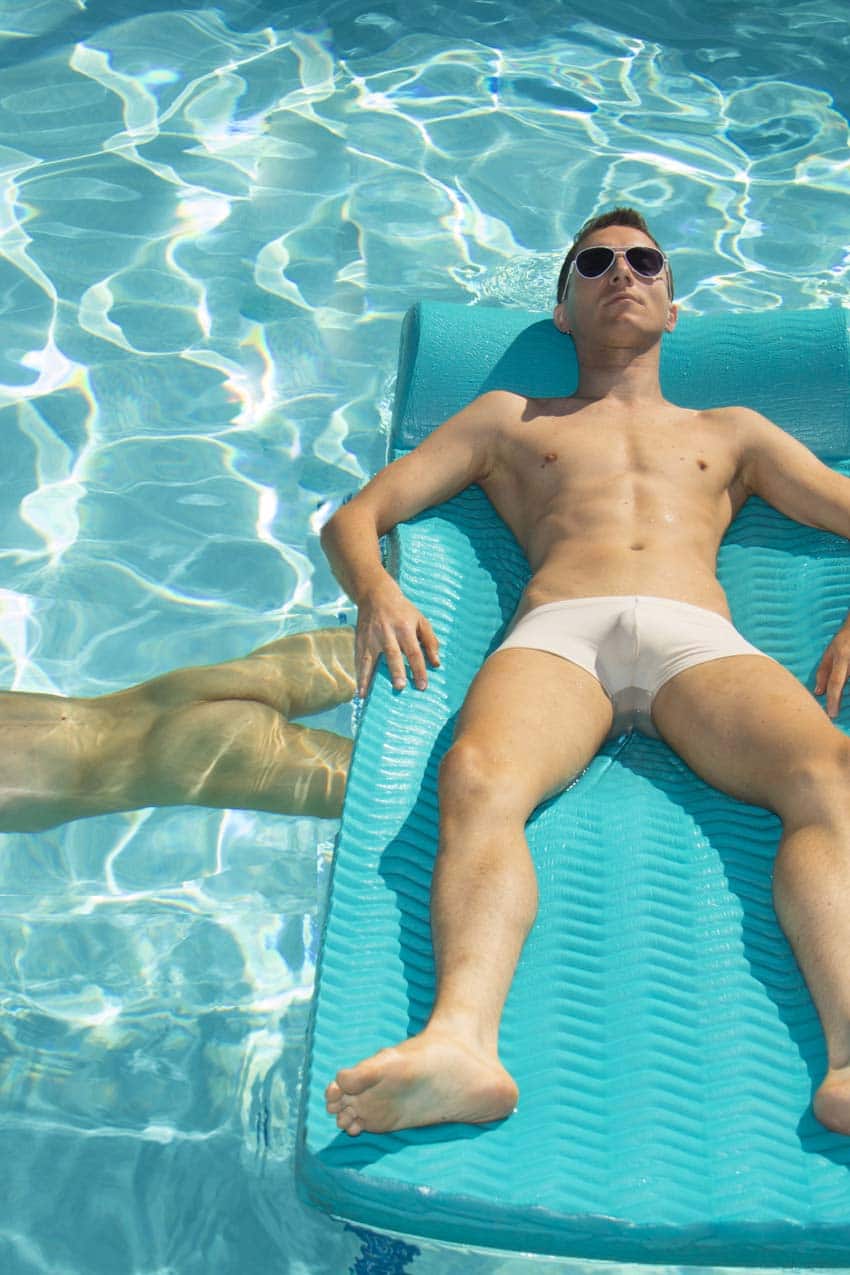 ‘We had this bad taste in our mouths,’ says Sandy, over Skype from the South California town now he calls home (both Jon and Sandy are originally from North Carolina). ‘We’d previously moved to San Francisco to save this restaurant we’d invested in.

‘We ended up there for 18 months. It was miserable. Running a restaurant is a horrible business! When we came to purchase the hotel, there was this nagging doubt.’

‘We kept telling ourselves: “It’ll be different. We’ll be working primarily with gay men”‘

‘As it turns out, running a restaurant and a hotel are night and day. People in hotels are on holiday, there for a good time. They’re patient. People in restaurants are impatient. They need problems fixed immediately. It’s high stress, high labour. We’re fortunate at Inndulge: we’ve got a great group of guys working for us, great guests from around the world. It’s fantastic. Hotels are the special exception to hospitality.’

Here, Jon reveals all about running a clothing-optional resort, from annoying bathhouse comparisons to the ‘organized chaos’ of 60 gay men when at full capacity…

Hi Jon! Firstly, had you been using clothing-optional resorts before buying INNdulge?

Sure. I started coming to Palm Springs in 1988. I always stayed in the gay hotels. They’re all clothing-optional. So yes, I’m very familiar with the concept!

I think I’d be too scared…

Don’t be afraid! That’s why it’s optional. That’s what people don’t understand. It’s common we have a couple check in, and one can’t get their pants off fast enough, and the other keeps his swimming trunks on the whole time.

There’s no judgement. Some won’t take their clothes off, some will skinny dip in the hot tub at midnight when it’s dark. Some where it all comes off the minute they arrive, and it stays off!

We can put two to a room, and we have a few rollaways. I’d say the most we’ve ever had is about 60, as we welcome single travelers. 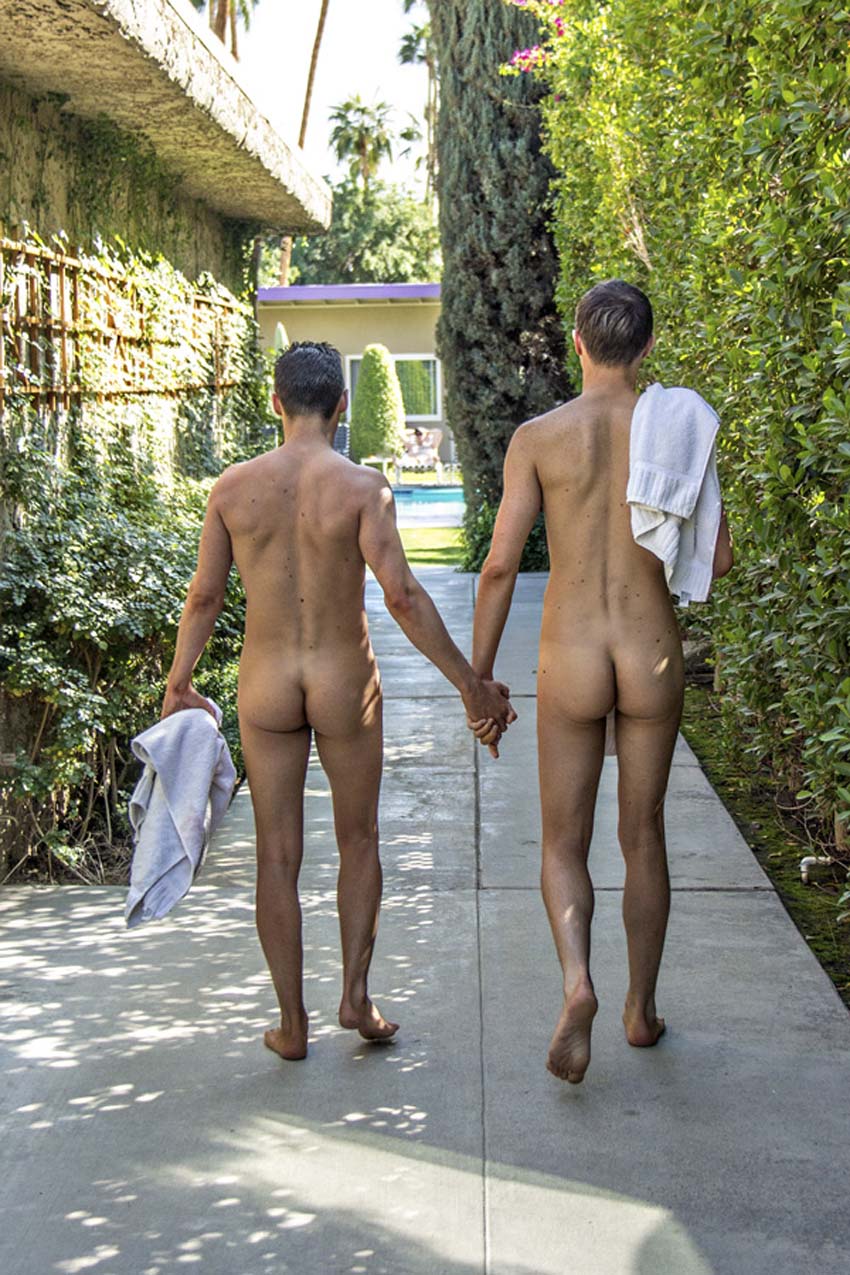 Organized chaos! The pool parties are amazing. In the summertime, the pool is full – 40 people tossing around beach balls at midnight. It’s glorious and beautiful that time of night. Everybody makes friends. Some people are shy, but we have a social hour every night to try and introduce people and help them get to know each other. There’s this really great energy at the resort all day long when we’re sold out. It’s why so many come back.

I wanted to bust some myths around clothing-optional resorts…

There’s a lot of confusion. Bathhouse-style resorts, where you’re not really paying for the room, you’re paying for the sexual activity: that’s not us. The majority of gay resorts in Palm Springs are not that way. But because there are three prominent resorts that are; that have day passes, and their average stay might be 45 minutes… Our guests sometimes stay 45 days!

There’s confusion in the marketplace that clothing-optional equals sex vacation. It couldn’t be further from the truth. If someone’s looking for that, we’re happy to refer them. We want people to come and be happy. But I don’t want someone to come to a sex resort and think we’re all like that anymore than I want someone coming to my hotel looking for a sex resort and being disappointed.

‘There’s no ageism that I see’

Is it a myth that it’s mainly older guys who stay?

It’s guys of all ages, but it does skew to a higher age level. That’s primarily because guys who are older have a little more money. They’ll have more time away from work, or if they’re retired, they can come and stay for a long time. We have plenty who check in for more than a month.

Guys in their 20s take weekends off and drive here from LA and San Diego; if they’re going to come for a full week, it’s a big part of the vacation budget they get every year. So financially, it drives the age higher. But men of all ages enjoy being around other gay men on vacation. 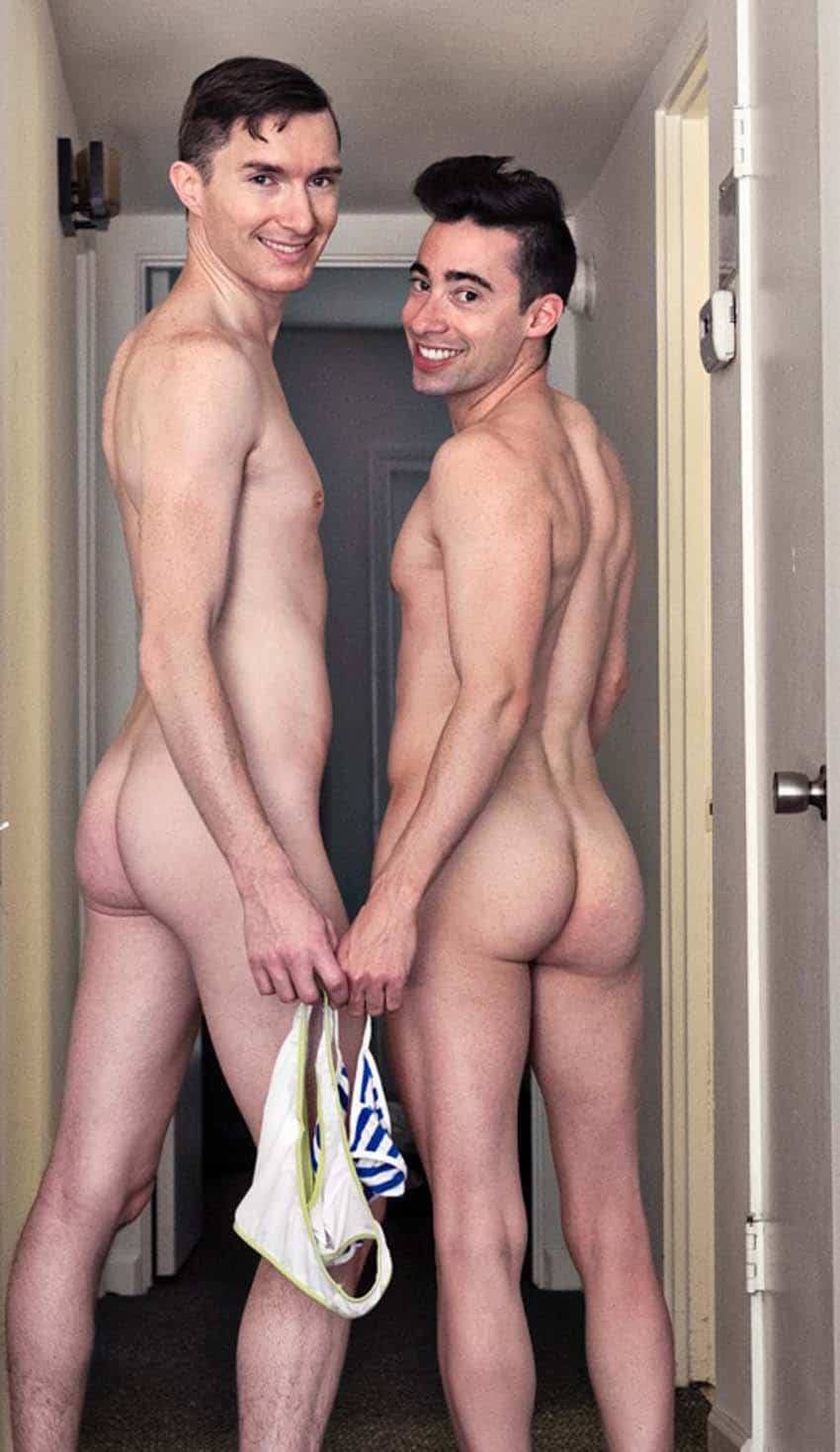 They appreciate the safe space we’ve created, enjoy being social. By and large, when we get younger travelers together with older travelers, they interact socially. There’s no ageism that I see. Everyone’s friendly. That’s what gay travel is all about. The freedom, the social aspect, making life-long friends. Because we share this wanderlust that all gay men seem to have.

‘One weekend, we had 13 different countries represented!’

Where are your visitors from?

Americans, probably 40-50%. We get 20-25% Canadian. Another 5% from Australia and New Zealand. Then we have a huge following in Germany and Britain. Particularly in July and August, when it’s 60-70% European. One weekend, we had 13 different countries represented!

It’s a great. I’ve been coming here as a visitor and a tourist since 1988. I was in college when I came out, met a group of friends with whom I’d take road trips, either to Laguna Beach, which used to be a gay mecca, or Palm Springs. We’d take these trips, these college kids, and stay four or five people to a room! But we’d always have a great time. Throughout my career [as an attorney] I kept coming back.

I have to say, I was a little worried moving here. Sometimes your favorite places to holiday aren’t nice places to live. It is different living here than as a tourist, but it’s amazing. There’s a large gay community, particularly off-season. Off-season when the tourists are out of town, it’s a very gay-dominant culture. From going to the grocery store to the doctor’s office to wherever, it’s very gay. It’s welcoming. It’s easy to be open here.

When you purchased INNduldge, was it already an existing brand?

The prior owners had started it. They’d taken a formally straight place in 1995 and built this business with a very loyal following. We came in and kept everything the same for the first nine to 12 months. We wanted to learn the business and not do anything that might offend the regular travelers and guests.

Then we proceeded over the last six to seven years to change nearly everything. But very slowly. We’ve completely remodeled the bathrooms. There’s been refurnishing of the rooms, landscaping changes, changes to advertising, marketing. It’s been a slow evolution. We never wanted to alienate guests who loved it just the way it was. I like to say we changed nothing, while changing everything.

Did the previous owners just fancy a change?

They retired – they still live in Palm Springs, we see them fairly regularly. They were just at that time of life to move on. 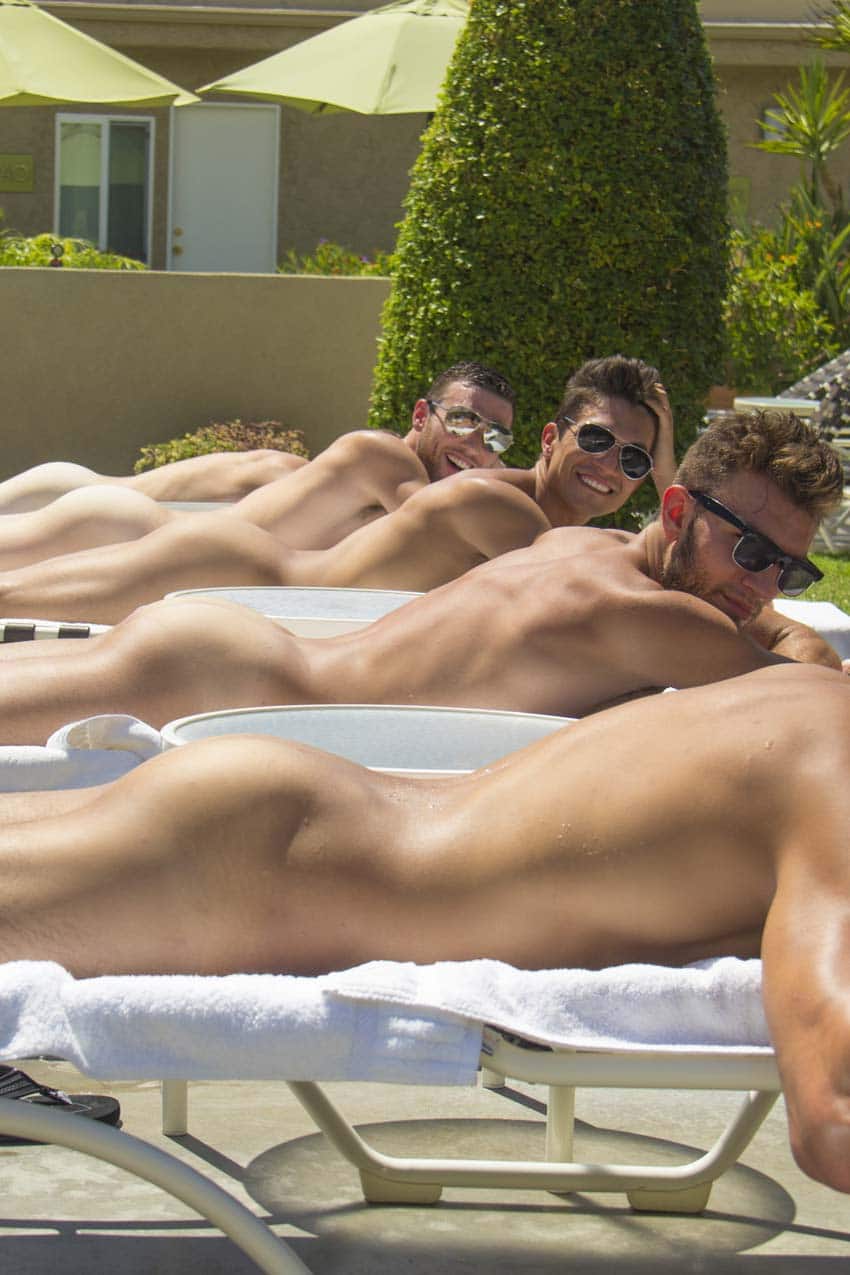 Do you live on-site?

No, Sandy and I live about five minutes away. We keep our distance – we understand it’s the guests’ vacation. So we check in on our staff every morning and make sure everything’s OK. Then we try to disappear and let our staff do their jobs and the guests have a good time. We do all our accounting and marketing off-site.

Then we try to get to the social hour every evening and that’s where we interact. I often say to Sandy: ‘This one is a success’, because we’re both standing there twiddling our thumbs.

‘Gay men have taken over the town’

Are you more likely to see a gay man in the supermarket line than a lesbian or trans person?

Yeah. There are lesbians and trans people here. But at the grocery store, the library or a restaurant, it’s primarily gay men. Palm Springs is taking off as a straight destination at the moment. But fortunately the gays have maintained their presence and continue to come. I don’t know why that is.

For a while the lesbians, with the Club Skirts Dinah Shore Weekend event… I think it was at one time equally popular. But I’d say now, gay men have taken over the town. Our city government is run wholly by LGBT counsel people. There’s a trans person, two gay men and a gay woman… the entire six-person counsel is LGBT.

I just spent a week in Fort Lauderdale. Sandy and I were introduced as a couple nearly 20 years ago by a guy who spends his summers in San Francisco and winters in Fort Lauderdale. We got out there once a year to see him. We stay at a gay guesthouse because we want to support the gay travel community. It’s a very similar vibe.