Home Gay Life What might a Narendra Modi re-election mean for LGBTI Indians? 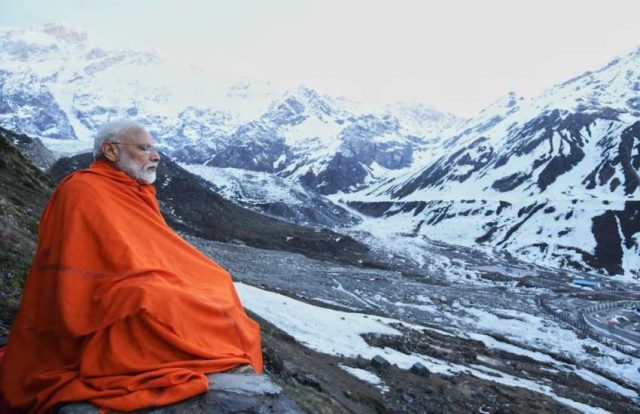 But Prime Minister Narendra Modi, of the Bharatiya Janata Party (BJP), seems to have emerged from the largest democratic vote in human history unscathed by growing criticisms.

But the voting season – cacophonous and vast – was one that, for the first time, saw in the burning spotlight.

With the PM’s brand of brawny Hindu nationalist politics perhaps playing well among the 900 million voters in the nation, just what will his re-election mean for the country’s kaleidoscopic queer community?

Firstly, Modi is one of the most powerful and divisive leaders India’s heaving electorate has produced. And he’s one that seems to be on track for re-election, according to exit polls released Sunday.

With his frosty white beard and spindly glasses, Modi ended his campaign by praying at a Hindu shrine and meditating in a remote Himalayan cave.

No wonder he searched for solitude. In seven phases over 39 days and 12 million polling officials managing over a million voting booths, India’s election season for their lower house – the Lok Sabha – is one unmatched by size and scope.

The attack became the heated nexus of a campaign that has largely linked terrorism to an alleged Pakistani Muslim threat.

, overall, a five year block of extreme security measures, the uniforming of India’s national identity (primarily aligned with Hinduism), and tax cuts for the middle class.

Indian National Congress, the main opposition party, seemed destined for defeat, if exit polls are to be believed. A party campaign haunted by its stunning defeat in 2014. 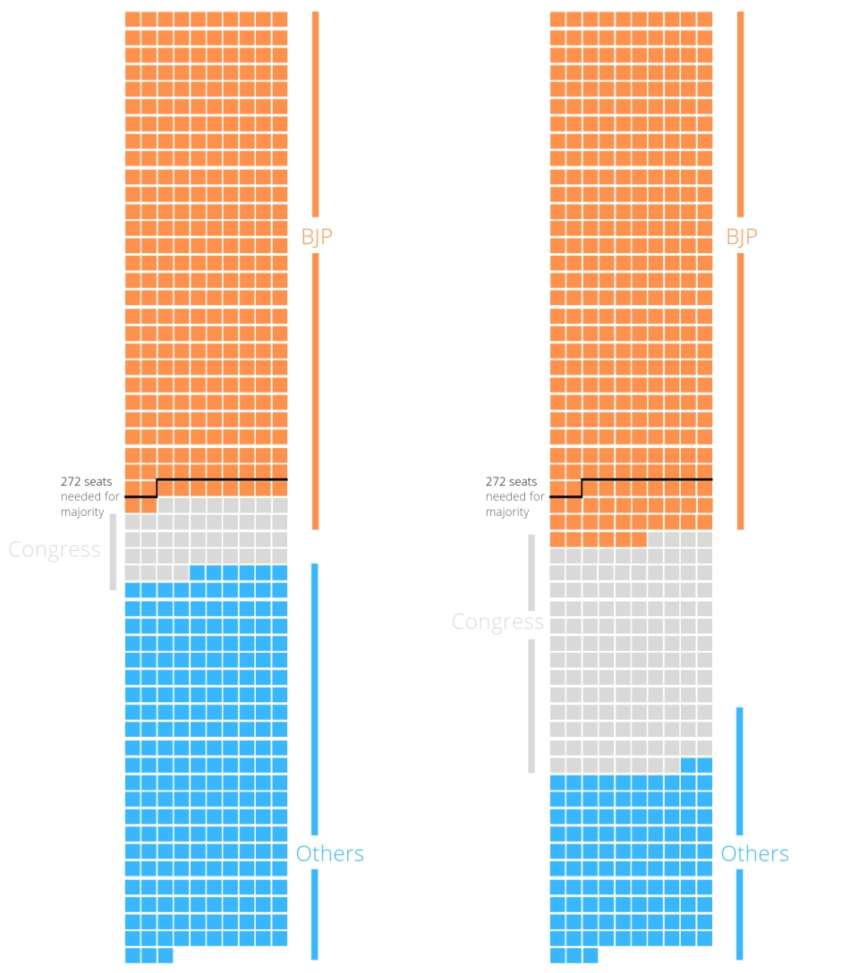 The 2014 (left) and 2019 Indian elections according to the TimesNow exit poll | Sources: Election Commission of India and TimesNow | Infographic: Reporter’s own.

Rahul Gandhi, Congress’s leader, had tried to pick up votes by appealing to communal harmony and minority rights. And, to a large extent, highlighting the growing emphasis of LGBTI rights.

But that seemed no match for Modi’s well-financed campaign machine, which enjoys the vigorous support of many grass-roots groups within India’s Hindu majority.

Gandhi has made no official reaction to the apparent win. Whereas the BJP posted a cartoon on Twitter of Modi crunching a scattered opposiotion with a gian lawn mower.

‘With this,” the illustration read, ‘the opportunistic hodgepodge is over.’

At least predicted Modi and his allies would win at least 280 of the 545 seats in the lower house. Empowering them to choose the next prime minister.

If the actual results – due tomorrow – back the polls up, it will be a much more dominating performance than many analysts could have seen coming.

Like any exit polls, those in India are imperfect. But accuracy has improved in recent years.

The major exit polls in 2014 correctly predicted a win for the BJP-led coalition.

Furthermore, the current exit polls were conducted by Indian research and survey organizations. While many partnered with news media outlets, combining decades of experience together.

According to the polling organizations, the sample size for each exit poll varied from 40,000 voters to two million. Nevertheless, political pundits express caution.

As officials begin to count and verify votes conducted on hundreds of electronic voting machines, the public will wait with bated breath.

Saanvi Laghari, known as Sa to her close friends, lives downtown in New Dehli, the bustling capital of India. She discovered, defined, and claimed her sexuality when studying abroad in the London, England as a young adult.

Now back at home at 23, she struggles. Closeted in her bisexuality in some ways, yearning for freedom in others.

To Laghari, the BJP are a threat, but not as bad as others.

‘Modi is way less shit than the other shittier options,’ she bluntly wrote to me. Highlighting that while, the BJP’s is barren.

Iyer told me that this year’s parliamentarians have been a ‘disappointment’ for queer Indians. ‘They have either been homophobic or inefficient and inadequate in driving our voices for decriminalisation.

‘Today, if we are free, the credit goes to the judiciary.

‘Our courts have done things our parliament has not – giving us dignity and respected our identity.’

Of the BJP, they described them as ‘chock-a-block with homophobic voices who provoke communal and regional tensions on the daily.’

They based this on vast amounts of the ruling party members denouncing the repeal of Section 377. A section of the Indian Penal Code that banned queer sex. 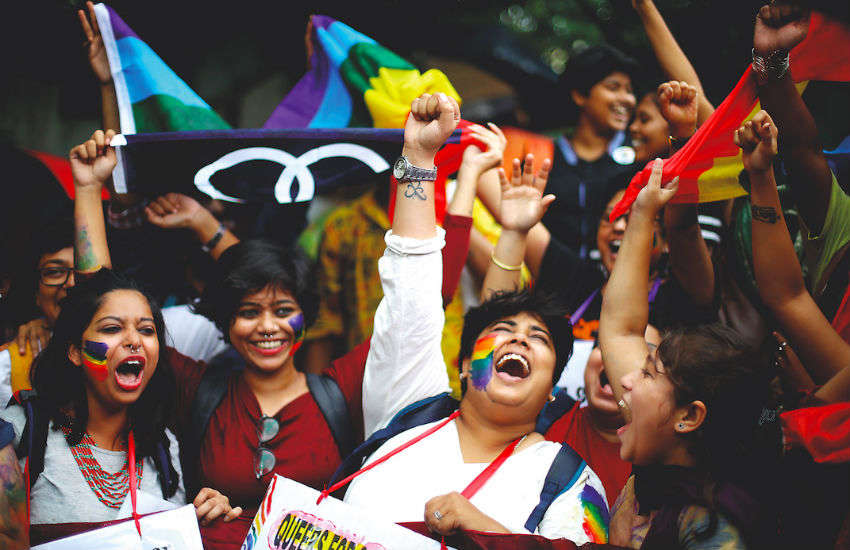 LGBTI campaigners celebrate in Kolkata, India, September 2018, on hearing that gay sex is no longer a crime (Photo: Piyal Adhikary/EPE-EFE/Rex/Shutterstock)

Iyer, from Barrackpore, West Bengal, said: ‘Though the senior leadership in BJP has oft taken a homophobic stance, I don’t believe that the entire right-wing brigade is homophobic.’

‘It is important to note that there are supporters of LGBTI rights across partylines.’

The activist remained hopeful about the win. The 40-year-old columnist asked that queer Indians and allies collaborate with those who oppose them.

‘Because when they do not know us as their brothers, sisters, friends, and mates they will not realize that we are people just like them.

‘They have nothing to be scared of in us.’

The BJP only mentioned their ‘commitment’ to India’s trans community in their pledges. They committed self-employment and skill development courses for young trans people. The rest of the LGBI+ community we left in the margins. The silence.

Also, according to Iyer, the home, external affairs, and the state chief minister of India’s largest state, Uttar Pradesh, have all made homophobic comments in the past.

Considering it all. Considering the accusations of homophobia, manifesto silence, and Himalayan meditation, what would the win mean?

‘Politically, it will be difficult,’ Iyer said. ‘But socially, we are a New India where the average age of the largest demographic is under 3o.

‘We are a young, open-minded nation.’