Home Gay Life When the pope met Putin: Why are people talking about the Great... 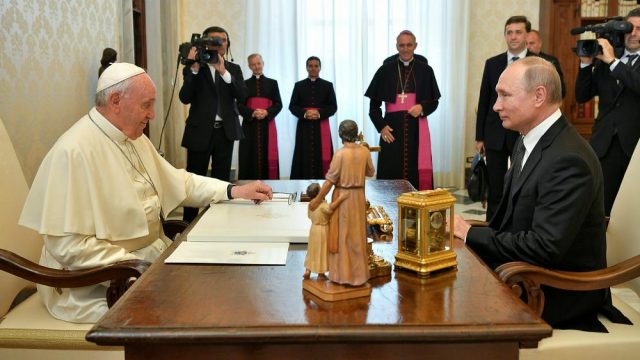 Pope Francis and Vladimir Putin met for the third time on Thursday as the Russian president began his state tour of Italy.

The meeting, which lasted just under an hour, is said to have focused on the situations in Syria, Ukraine, and Venezuela, which Putin ultimately said was “very substantive and interesting.”

But the talks also marked — perhaps more notably — a parley of two competing branches of Christianity, of which the somewhat tense rivalry dates back almost 1,000 years.

As its name suggests, the great schism signalled the official split of Christianity in the year 1054 to become the Roman Catholic Church and the Orthodox Church.

This divide was also apparent geographically as the former dominated the West and was led by Pope Leo IX, while the latter was led in the East by Michael Cerularius, the patriarch of Constantinople (now known as Istanbul).

Why did they split?

The break itself was just the peak of a centuries-long rift between the churches in the east and the west — and it was just as much a political, sociological and geographical rift as it was theological.

Firstly, the fall of the Western Roman Empire in 476AD helped recognise the rift in what was already a significant geographical and cultural divide with the Eastern Roman Empire — known as the Byzantine Empire — which thrived amid its counterpart’s demise.

It continued to thrive for another 1,000 years until the Ottomans took control in 1453.

During this time, differences in opinion over the jurisdiction of the Balkans region, and the Byzantine Empire’s difficulty in accepting the pope as a supreme authority led to further power struggles.

In 800AD, the pope crowned Charlemagne, the king of the Franks, emperor of the Roman Empire — a notion rejected by the Byzantines.

Differences in theological beliefs stemmed from the East’s foundations in Greek philosophy, while the West is rooted in Roman law.

There were several disputes over the centuries that led to mini-schisms over belief in whether Jesus is a divine being —and therefore equal to God — or a subordinate.

How did they eventually split?

After hundreds of years of increasing discontent and rivalry, Pope Leo IX excommunicated the patriarch of Constantinople, Michael Cerularius.

Cerularius then excommunicated Leo right back.

The 965-year divide between the two churches has never been healed, despite several pleas from the West.

But tensions appeared to thaw a little following a historic meeting between Pope Paul VI and Patriarch Athenagoras in Jerusalem in 1964.

Russia, which is home to the Russian Orthodox Church, re-established diplomatic relations in 2009.

Seven years later, Pope Francis met with Russian Patriarch Kirill in Cuba in 2016, which was the first meeting of this kind.

But after Putin’s meeting with Pope Francis on Thursday, Russia has warned against moving too fast in expecting the state to hold an official papal visit.